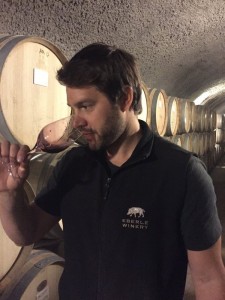 – Eberle Winery announced this week the newest addition to its team. Chris Eberle, no relation to owner Gary Eberle, is the new winemaker. Chris fills a position left by previous winemaker Ben Mayo.

“It was a difficult 17 months during the takeover of Eberle Winery,” Gary Eberle says. “But my wife Marcy and I got the place back and are looking forward to our new chapter here at the winery and with Chris on board and in charge of all production operations.”

Chris Eberle was Assistant Winemaker at the winery from 2006 to 2009.

He is a graduate of California Polytechnic State University with a Bachelor of Science degree in Agribusiness and a diploma for Enology from the University of Washington at Pullman.

He was most recently working as Assistant Winemaker at Howard Park in Australia. He says he’s happy to get back to Paso Robles and do what he does best at a winery he already knows well. “From the vineyards to the caves to Gary and Marcy and the crew, this is like coming home. I always knew I’d be back.”

Gary Eberle also announced the promotion of Nick Compton to assistant winemaker. Compton has been with the winery for more than two years.