Paso Robles News|Thursday, January 20, 2022
You are here: Home » Business » Economists at forum say San Luis Obispo County is ahead of the curve 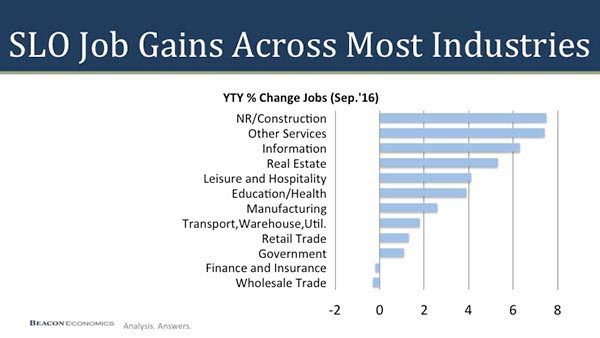 Economic forum warns of ‘cybrids’ and a new world

—Last Friday at the 9th annual Central Coast Economic Forecast, economists from Los Angeles and New York spoke to some 400 community leaders with the good news that the local economy is doing fine and “firing on all cylinders,” according to Robert Kleinhenz of Beacon Economics.

The California economy has outpaced the national economy for the last four years and the unemployment level in San Luis Obispo County is lower than the state unemployment rate.

County leisure and hospitality sectors are experiencing healthy growth, along with education and healthcare. “Healthcare added jobs even during the recession,” said Kleinhenz. The construction industry also added new jobs over last year. The local economy grew by 2.6-percent in the past year.

”Everybody wants to have that growing tech sector,” quipped Christopher Thornberg of Beacon Economics, “to be another Silicon Valley.”

Kleinhenz warned that the local community will have to adjust to closure of the Diablo Canyon Nuclear Plant. ”Change is going to happen,” he said.

Real estate sales are just “so-so,” and California home prices are still below the peak before the great recession of 2008. “Sales are up but it’s a very constrained market,” Kleinhenz said. “The rental market is going strong but home ownership rate in California is at its lowest rate in 40 years.”

Another keynote speaker was Erica Orange, executive VP at The Future Hunters in New York, a firm that studies business and economic trends. Orange argued that the future will be largely determined by the new generation following the “millennials,” usually referred to as “Generation Z.”

“We call them cybrids,” Orange said, “because this is the first generation in history to have a truly symbiotic relationship with the technology around them. They are literally growing different brains. They are collaborative, inclusive, entrepreneurial. Whereas millennials as a whole are very risk-averse,” Orange said, “the cybrids are going to create this new ecosystem. Eager to build a better planet, they won’t have as much brand loyalty. They control almost 44 billion in spending power in the US alone. They do not want to be tracked; they want to control their own data.

“Cybrids will be able to navigate better as their lives will flow seamlessly between the virtual world and the real world.”

Orange concluded that in the economic future, “New jobs will come in creativity, innovation and collaboration…the things that can be digitized will go into software [but much] cannot.”

“Think of the future in terms of imagination,” Erica Orange said.