Paso Robles News|Wednesday, November 30, 2022
You are here: Home » Atascadero » Edie Knight takes the witness stand in her own defense in election trial 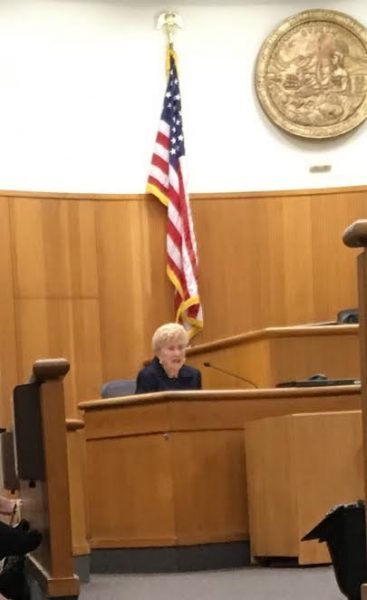 –Edie Knight, an 86-year-old Atascadero grandmother is accused by the State Attorney’s General Office of electioneering. She told the jury she did not tell prospective voters she called “on behalf of Debbie Arnold.” Her accusers, Stephen Williams and Charles Kleeman, each testified they heard her say that. It’s one of the several discrepancies to manifest in Thursday’s courtroom. The other surprise came when defense attorney Ilan Funke-Bilu revealed that Stephen Williams, who shot the video of Knight calling voters, was not an American citizen while he worked as a poll watcher.

Edie Knight told the jury she was sorry if she broke the rules, but said she did not know calling prospective voters from the lobby of the Elks Lodge was against the law.

The judge dismissed the first count against Edie Knight, on a request from Defense Attorney Ilan Funke-Bilu. The judge refused to dismiss the second count, which includes electioneering.
Because of Judge Craig Van Rooyen’s scheduled, there is no court session today. On Monday afternoon, they’re expected to begin closing arguments.