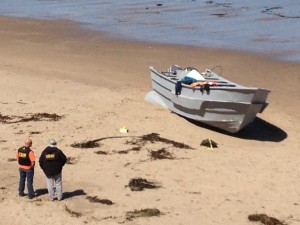 File photo of a panga booat previously seized by authorities.

Early Thanksgiving Day morning at about 3:30 a.m. sheriff’s deputies saw a white Dodge full-size panel van in the San Simeon area, which has been the location of maritime smuggling activity. The deputies followed the vehicle and upon observing a vehicle code violation they stopped it on Highway One at Vista Del Mar in San Simeon.

Upon approaching the panel van the deputies saw that it contained between 60 and 90 large bales of marijuana. The amount of marijuana is estimated to be between 2,000 and 3,000 lbs. based on the size of the bales. The driver of the van was identified as Rafael Rebolledo and he was arrested at the scene for conspiracy and transportation of marijuana.

Sheriff’s narcotics detectives were called out and began their investigation, which included a search of the coastline from San Simeon north to the Monterey County line. Sheriff’s detectives located a 35 foot panga boat with three 225 HP Yamaha outboard engines and with approximately 300 gallons of gasoline on board, abandoned on the beach.

Sheriff’s detectives then began a search of the immediate area near the landing site for any suspects that may have still been in the area and at approximately 8:30 a.m. they located and arrested five male subjects connected with the marijuana offload operation, near the Piedras Blancas Lighthouse.

Upon processing the crime scene members of the sheriff’s dive team were able to remove the panga boat and the gasoline that it contained, from the beach, and drive the boat under its own power to Morro Bay. The Dodge van containing the marijuana bales has been transported to sheriff’s headquarters where the sheriff’s crime lab will process it and the bales of marijuana for evidence.

Several suspects have been arrested for violations of California Penal Code section 182 – Conspiracy and California Health and Safety Code section 11360 – Importation/Transportation of Marijuana. The investigation by Sheriff’s detectives into this maritime smuggling operation is continuing.