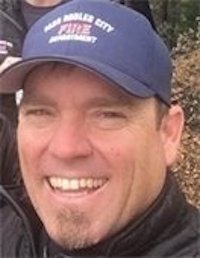 –The Emergency Services Department has announced the promotion of Robert Smith to Fire Captain/Paramedic.

Smith joined the Department in 2002 and has held the rank of Firefighter, Firefighter-Paramedic, and Acting Captain/Paramedic. Robby has been a paramedic since 2015, serves as a member of the North County Technical Rescue Team and oversees the department’s personal protective clothing program.

Smith resides in Paso Robles with his wife and two children.