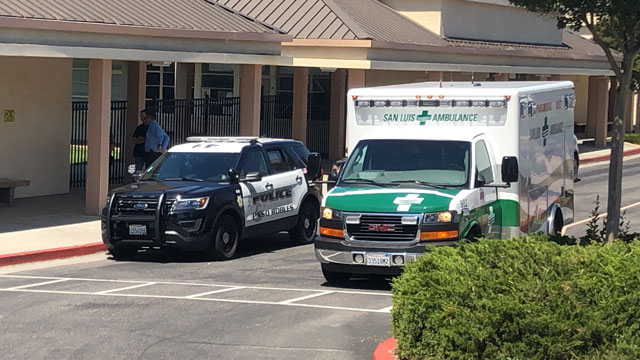 Paso Robles Emergency Services were dispatched to Daniel E. Lewis Middle School in Paso Robles at about 11 a.m. Friday morning for a report of students in need of medical attention.

Nine students were reported to be involved with minor medical emergencies, according to Paso Robles Fire Battalion Chief Scott Hallett. Nothing appears to be too serious in nature, he said.

The students were evaluated for symptoms that resulted from inhaling an unknown substance from a vape pen passed around among students. There are reports that the vape pen contained cannabis, but authorities could not confirm that.

All patients were triaged according to EMSA guidelines and were eventually released back to parents or school officials. “One patient was transported by ambulance to a local hospital,” said Hallet at 7 p.m. Friday evening, after conflicting reports.

Dispatchers referred to the emergency as a “Multi-Casualty Incident, Level 1,” (MCL-1) which means the incident will require several local and potentially regional resources and responding agencies. MCL-1 means three to 10 patients are affected and advanced notification is given to local hospitals. Patients are triaged and identified with tags, red, yellow, or green, to rank the severity of injuries. In this incident, all students were green-tagged.

Reached for comment on Friday morning, a school employee said they could not discuss the matter and that the principal was not available for comment. The Paso Robles School District has not returned a call for comment at press time, however, later released this statement on Facebook:

Today at Lewis Middle School there was an incident involving multiple students in possession of and under the influence of a controlled substance. Site staff and emergency services responded quickly to the health needs of our students. All students were assessed and received the appropriate medical attention. Parents of students involved with this incident were promptly notified by the school site. Thankfully all students are have been released to parents and/or receiving medical attention.

Vaping continues to be a concern for youth across our nation. Paso Robles Joint Unified School has held two town hall meetings regarding this teen epidemic; one of which was hosted by Lewis Middle School. Lewis Middle also hosted San Luis Obispo Sheriff’s Department who did grade level assemblies focused on vaping this past Fall. We will continue to work to educate our students and families on the dangers of vaping. If you have concerns regarding your child and drug use, please do not hesitate to contact your site administration.

Editor’s note: This article was updated on Friday at 8 p.m. with more complete information.