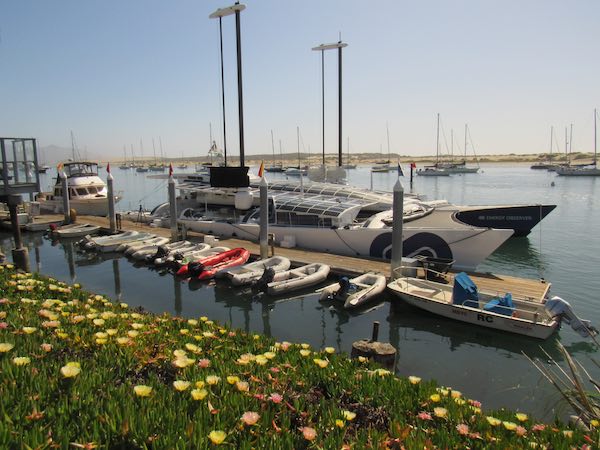 –Morro Bay is a great town to live in not just because the weather is great and the scenery outstanding, but because we get to see some of the most unique sailing vessels that often find a port in a storm stopping here.

The weekend of May 1 and 2 was no exception. Thanks to force-10 gale winds blowing out on the ocean, a spectacular vessel sailed into the local harbor and docked at the Morro Bay Yacht Club. The Energy Observer was on its tour of California waters and heading to San Francisco after stopping at Long Beach in Southern California.

From tall ships to exotic Russian yachts and ancient sailing vessels to the Yaquina dredge to the Brier Island Replica to our own Pappagallo, Chablis, and former Tiger’s Folly, to the Sub-Sea Submarine, not to mention a few World War II boats and historic tugboats, Morro Bay has seen them all at one time or another. Once there was even a car-boat launched in the bay. While huge visiting yachts are not uncommon nothing quite like the Energy Observer was ever docked in our harbor before.

Upon first seeing her you can’t miss the abundance of solar panels that cover almost every inch of space on her exterior. Right away the assumption is that this vessel is solar powered. Guess again! It is hydrogen-driven.

This is the first vessel powered by renewable energies and hydrogen and is a French Ambassador for the United Nation’s Sustainable Development Goals of 2015. The Energy Observer Project began n 2013 by Victorien Erussard, a merchant navy officer and ocean racer. Erussard is committed to the planet and brought together a team of sailors, scientists, engineers, and reporters to create the first self-sufficient vessel capable of drawing its energy from nature while also preserving it. This dream became a reality four years later when Energy Observer was launched for the first time.

Viewing the Energy Observer, it is at once obvious that it is a huge catamaran covered with solar panels, and sprouting up on both sides are two tall masts. While the ship is not sailing what appears to possibly be sails are bunched at their base. When sailing this material is drawn to the top of the masts and completely encases them.

Energy Observer is a laboratory for the ecological transition designed to push back the limits of zero-emission technologies. Hydrogen, solar, wind and waterpower are all solutions experimented within this vessel. These are tested and optimized with a view to making clean energies a practical reality accessible to all.

This vessel has become a movement in a round-the-world Odyssey with every stopover on its tours giving an opportunity to learn, understand, and share the different energies.

Energy Observer sailed into Long Beach, California harbor on April 22 during the Earth Day and Leaders Summit on Climate in the U.S. It was the 65th stopover on her round-the-world tour. Morro Bay was a lucky recipient of her visit thanks to our usual springtime winds! While there were no public tours and not much publicity here, many locals and tourists got to see this unusual vessel during her stay. The curious, like myself, looked up their website: www.energy-observer.org to find her story. I recommend readers of this publication who are interested in the climate change issue go online and read about it.

Morro Bay is privileged to have had some small part in Energy Observer’s environmental success. We wish he happy sails as she tours the world promoting renewable energy.