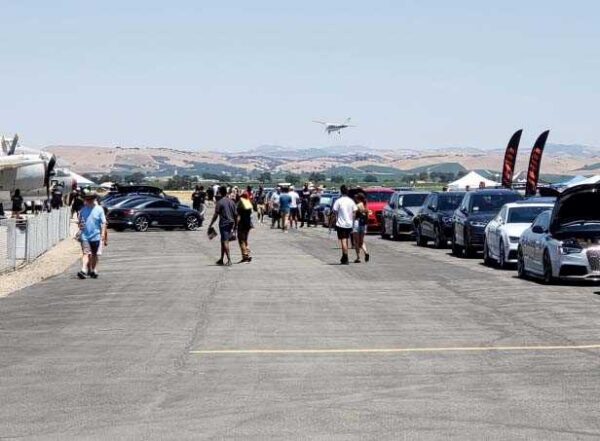 A total of 221 Audis were at the meeting

-The Estrella Warbirds Museum and Woodland Auto Exhibit hosted a meeting of Audi car owners on Saturday. The event included tours of the museum and auto display, as well catered meals for the participants.

Audi car owners from around the state gathered at the museum to share information about their cars such as performance enhancements, technical problem solutions, and other tips to improve their driving experience.

“We often host car clubs and enthusiasts at the Museum,” said Museum Coordinator Ken Neuman, “but this is the largest group we have ever had.” He said, “when they first called, they said they might have 50 cars, but then later said more than seventy five, but less than 100.” The official count was 221 Audis.

This was the third event coordinated by Audi Gruppe Silicon Valley, an Audi owner association. Not a car club, or affiliated with Audi America, the association selects a location in central California, organizes an event, and sponsors a charitable organization, such as Toys-for-Tots, with donations from the participants.

Audi vehicles are built in nine production facilities worldwide, including the United States, by Audi AG, a subsidiary of Volkswagen Group. The company designs, engineers, produces, markets, and distributes the performance luxury cars. The cars are coveted by an almost cult-like group of owners.

The Estrella Warbirds Museum and Woodland Auto Exhibit are located at 4291 Dry Creek Road, Paso Robles, California 93446, and are open Thursday, Friday, Saturday, and Sunday from 10 a.m. until 4 p.m. Information about upcoming events can be obtained by visiting their website at www.ewarbirds.org, or calling (805) 238-9317.