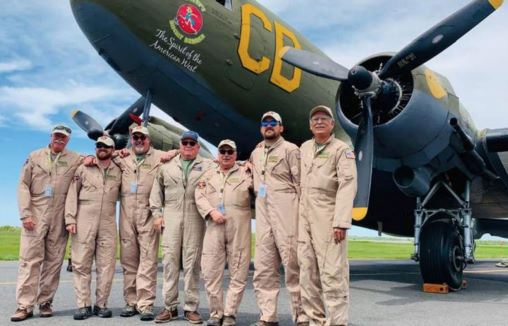 Betsy’s Biscuit Bomber and The Gooney Bird Team. Pilot Sherm Smoot is fourth from the left.

– Area residents will have the thrill of seeing a restored WWII C-47 aircraft with local veterans aboard in the skies over SLO County on Saturday, Aug. 27. The sightseeing flight in the 19- passenger “Betsy’s Biscuit Bomber” is being gifted to Honor Flight Central Coast California by the Estrella Warbirds Museum and plane owners the Gooney Birds. The flight will prepare to take off at 11 a.m.

According to Estrella Warbird Museum Director Ken Neuman, the donated flight is the museum’s way of thanking veterans for their service and offering a local flight for veterans whose Tour of Honor trips to Washington DC have been delayed by COVID-19 and a long trip waiting list.

Caralee Wade, flight coordinator for Honor Flight, said that most of the passengers on board the Aug. 27 flight will be Vietnam veterans, creating an ideal opportunity to call attention to this group. “Because the national Honor Flight organization originally focused on WWII veterans, we know many more recent service veterans think the trips are not for them. Nothing could be further from the truth,” said Wade.

“While we give priority to our most senior or ill health veterans, our flights are open to any veteran of any era and service, and we are excited that Vietnam veterans now make up the biggest proportion of veterans flying to DC with us.” She said that the C-47 flight is a way to herald that shift and encourage other veterans to submit trip applications.

The fully restored Betsy’s Biscuit Bomber returned to Europe in 2019 along with a fleet of C-47’s as part of the 75th Anniversary of the Normandy Invasion. The historic flight was captured in a documentary, “Into Flight Once More,” narrated by actor and veteran services advocate Gary Sinise. The film was screened as part of the 2022 SLO International Film Festival.

The C-47, an aviation icon, was considered by General Dwight D. Eisenhower to be one of the tools most vital to military success. The aircraft operated from every continent and participated in every major battle during WWII. Throughout its long and distinguished military career, the C-47 Skytrain was utilized in various roles, including hauling cargo, transporting troops, dropping paratroops, towing gliders, and more.

Betsy’s Biscuit is owned and operated by Paso Robles-based Gooney Birds, LLC. Still boasting an original WWII interior, the plane will be piloted by Gooney Bird Sherm Smoot, who with other Gooney Bird partners, flies the aircraft to airshows around the country. Betsy is one of the lowest flight time, most authentic WWII skytrains still in airworthy condition.

Honor Flight Central Coast California, a nonprofit organization that takes veterans to Washington DC to see the memorials honoring their service, extends its heartfelt appreciation to Estrella Warbirds and Gooney Birds for their generous gift of the flight.

Note: Flight is subject to cancellation due to weather conditions.