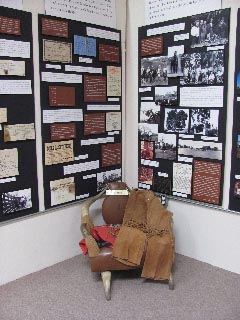 Mr. R.E. Jack, namesake of the ranch and pioneer, is featured in the new exhibit at The Paso Robles Pioneer Museum.

– The Jack Ranch Cafe on the way to Fresno or Bakersfield on Hwy. 46 east is a familiar landmark. Many locals have stopped there for breakfast or lunch or to study the gleaming monument to actor James Dean – who was killed in a car accident just a half-mile away. But who was Jack? Now, curious history buffs can learn more about Mr. R.E. Jack, namesake of the ranch and pioneer, at the new exhibit at The Paso Robles Pioneer Museum.

R.E. Jack was a ranch manager who borrowed money to buy half what had previously been known as the Rancho Cholame. Over the next century he and his family built the spread and dealt with the extraordinary changes happening not only in the farming and ranching environment, but also on the Central Coast and the world as a whole.

Just shy of one hundred years after purchasing the ranch, R.E.’s son Harold sold the property to the Hearst Corporation. The size and uniqueness of the ranch had already left its legacy in the North County, including the beautiful Jack House and gardens on Marsh Street in San Luis Obispo.

Photos and artifacts about the Jack Family history have been collected in collaboration with the San Luis Obispo History Center, Cal Poly Special Collection, and the Paso Robles Pioneer Museum. “We are showing through photographs and displays the history of the wool and cattle trade, Indian and Chinese labor, and artifacts such as Howard Jack’s one-of-a-kind vaquero saddle,” says Museum President Bonnie Nelson.

A second new exhibit at the museum depicts life on the family farm, and how early settlers would go about selling their crops at the Farmers Alliance. Everything started with the family farm; food was produced and preserved, and horses were used to cultivate and harvest the hills of the area. At one time, the Paso Robles area was second in grain production in the state. The farmers needed to sell their crops, so alliances were formed. The most important was the Farmers Alliance. It stood as an important part of this community for many years.

In the 1920’s, almond trees were planted on the hills around Paso Robles. The dry land almonds were popular with candy makers. Paso Robles became the “Almond Capital of the World.” 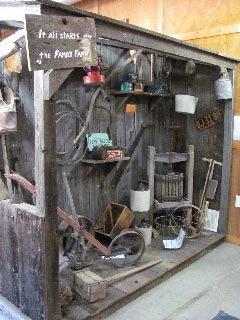 The second new exhibit depicts life on the family farm, and how early settlers would go about selling their crops to the Farmers Alliance.