Cattle run through the streets of Paso Robles 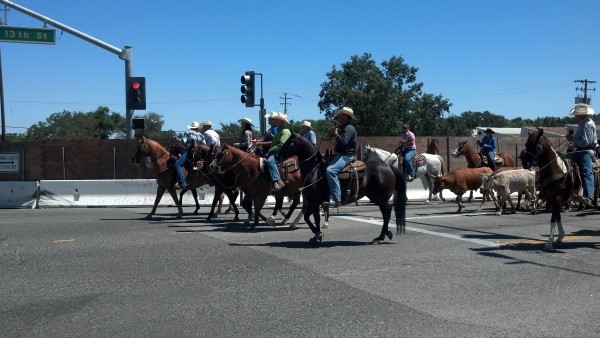 The annual Mid-State Fair Cattle Drive moves through the streets of Paso Robles this morning.
Photo by Martha Neal.

As in years past, a cattle drive kicked-off the 2013 California Mid State Fair. Traffic was congested for approximately 1.5 hours, between 10 a.m. and 11:30 a.m on Wednesday, July 17, 2013, as the cattle made their way through Paso Robles.

The Paso Robles Police Department closed various street intersections as the cattle moves through the city. The cattle drive began at Borjon Auto Center at the corner of Highway 46 and Golden Hill Road, and the cowboys ran the cattle down Golden Hill Road to Union Road, cross North River Road to the 13th Street Bridge, and then turned right up Riverside Avenue to the Paso Robles Event Center.

About fifty head of cattle were driven along the streets with the cattle scheduled to arrive at the Paso Robles Event Center between 11-11:30 a.m.

Motorists were urged to be patient, expect delays, and to pre-plan alternate routes to reach their destinations while this event is in progress.

Video of cowboys and cattle getting ready to ride