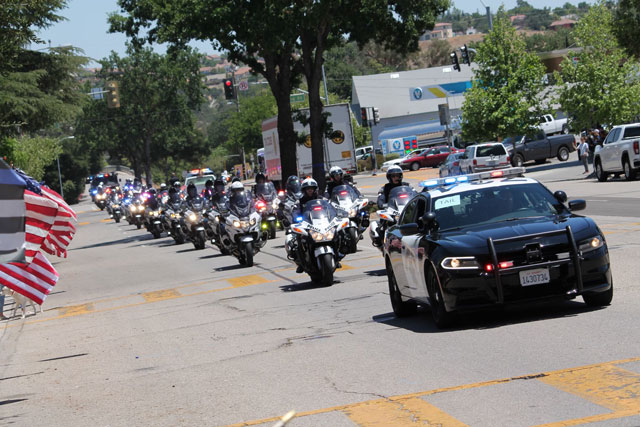 After the service in the morning, a funeral procession headed through the North County to the Paso Robles District Cemetery at around noon.

Benedetti began his career in Atascadero more than a decade ago. His final trip through Atascadero attracted crowds along the freeway. Hundreds of people gathered on bridges over Highway 101 to salute the peace officer who was killed in the line of duty as the procession headed north.

The lengthy entourage included police motorcycles, patrol cars, and other emergency vehicles from the City of San Luis Obispo County and other law enforcement agencies through the county. Some carried officers and sympathizers from other states.

A large crowd of mourners gathered on the San Anselmo Street bridge in Atascadero to say a final farewell to the officer who once patrolled their streets.

Outside Flamson Middle School in Paso Robles, more than a hundred citizens, teachers, and students gathered to pay their final respects. Principal Tim Vincent allowed students to leave their classroom briefly to watch the procession pass by their school. Some waved flags. Others simply watched as the 20-minute procession passed the south side of the Flamson Middle School on 24th Street. 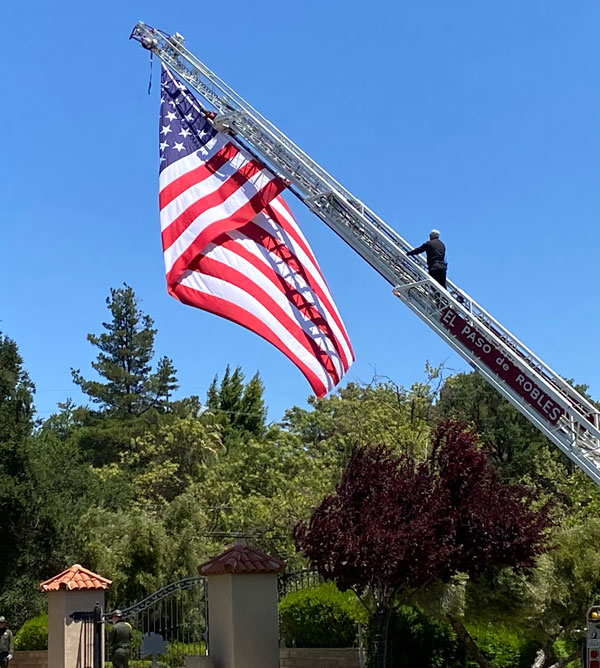 Paso Robles firefighters raised a giant flag from an extended ladder of a hook and ladder truck at the entrance to the Paso Robles District Cemetery. The procession passed through the gates to a closed ceremony that attracted more than a hundred law enforcement officers and government officials.

Bagpipes and trumpets added a solemn serenity to the ceremony. Detective Benedetti was laid to rest in the Paso Robles District Cemetery with hundreds of American veterans, many of whom also made the supreme sacrifice in the line of duty.

The procession and ceremony invoked great respect for those who wear a police uniform in San Luis Obispo County.