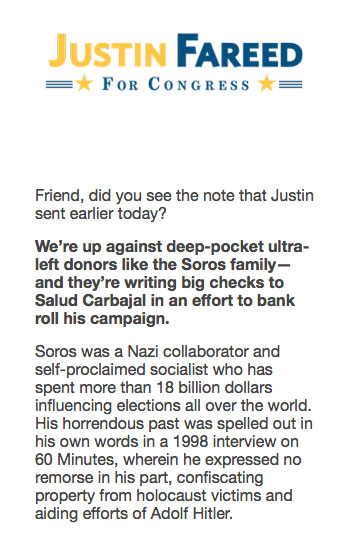 –The campaign to elect Republican Justin Fareed to U.S. Congress recently claimed that incumbent Congressman Salud Carbajal (D-Santa Barbara) was being funded by a Nazi collaborator.

In a fundraising email to supporters, Fareed’s campaign released the following statement:

“George Soros, the patriarch of the family, has funded $18 billion dollars towards 527 left wing and socialist political organizations. He began acquiring his wealth during the Holocaust, on the backs and at the cost of millions of innocent victims lives as a Nazi collaborator. Then later in life he bankrupted millions of retirees and almost broke The Bank of England—this is the ilk supporting Salud Carbajal.” 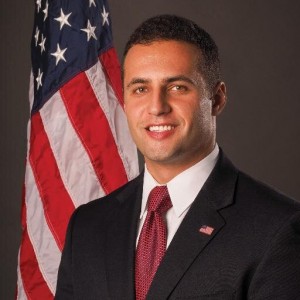 The email included a link to a Youtube video clip from 1998 as its source, where Soros is interviewed by 60 Minutes and speaks about posing as a Christian to survive Nazi occupation of Hungary when he was 14 and to avoid being taken to a concentration camp.

The Carbajal campaign did receive a donation of $1000 from Jonathan Soros, the son of George Soros, who, in the words of Fareed’s Campaign Manager Austin Stukins, “…is essentially the front man, and George Soros is the man behind the curtain.” Soros has invested 18-billion dollars worth of family money to back political campaigns this way, Stukins says.

“This is a ‘simply disgusting’ attack that has no basis in reality. I hope Mr. Fareed’s campaign retracts these claims and sticks to the facts moving forward.”

A Snopes investigation into Nazi accusations against George Soros reports:

As a prominent political activist and supporter of left-wing causes, Hungarian-born billionaire financier George Soros has frequently been the target of smear campaigns, none more odious than the persistent — and false — claim that Soros, a Jew, was a Nazi sympathizer, collaborator, and/or paramilitary officer during World War II.

That Soros was only nine years old (born in 1930) when the war broke out and all of 14 when Nazi Germany surrendered in May 1945 hasn’t dampened his detractors’ enthusiasm for spreading these rumors, of which none is more absurd than the claim, which first surfaced in November 2016, that Soros literally served as an officer of the paramilitary Schutzstaffel (SS) in Germany.

Updates will be posted as the story progresses.
View the 60 minutes Youtube clip below: