Update: CHP identify man who died as a result of rolling tire

–California Highway Patrol has identified the man that died in the fatal collision that occurred on Highway 101 on Oct. 29 as Peter M. Mays, 82-years-old, from San Miguel, Ca. Mays was the passenger in a 2019 Jeep Cherokee when the Jeep was struck by a tire that had come off a separate vehicle and collided with his vehicle. Mays sustained fatal injuries as a result of the collision.

–CHP has released more details regarding the fatal collision that occurred on Highway 101 Thursday.

On Thursday, at approximately 2:20 p.m., 61-year-old Dean Levonian of St. Augustine Florida was traveling Southbound on Highway 101, south of Spring Street at approximately 55-mph in his 2008 F-150 truck, towing a 2014 Crossroads fifth-wheel trailer. While traveling in the outer lane, the right wheel became dislodged from the rear axle of the trailer and came loose from the trailer for a yet-to-be-determined reason. The wheel rolled across the southbound lanes of traffic and cleared the median guardrail. As this was happening, 81-year-old Beverly Mays of San Miguel was traveling northbound on Highway 101 in the outer lane in a Jeep Cherokee with a right-front passenger, who has yet to be identified pending next-of-kin notification.

After clearing the median guardrail barrier, the wheel landed on the top of the jeep on the passenger side. The impact from the wheel caused major blunt force trauma to the passenger, who succumbed to his injuries within minutes of the crash. Levonian was reportedly unaware the wheel had separated from his trailer and was flagged down by a Southbound motorist who witnessed the wheel come free from the trailer. He later stopped his truck and trailer Southbound on US 101 north of Main Street where officers contacted him. Officers say that there were no indications that drugs, alcohol, or distracted driving contributed to the collision. 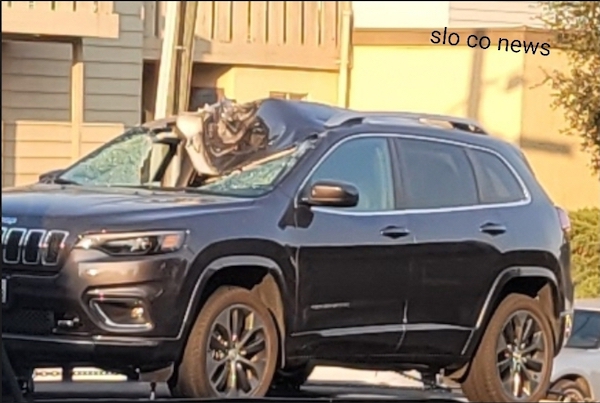 –One person has died as a result of a collision that occurred on Highway 101 Thursday afternoon in Paso Robles.

Reports say that a tire came off of a fifth-wheel trailer heading southbound, and struck a Jeep Grand Cherokee driving Northbound on Highway 101.

Multiple vehicles were involved. One subject succumbed to their injuries. The ramp was closed for some time while CHP investigated, according to eye-witness reports. No further details are available at this time.