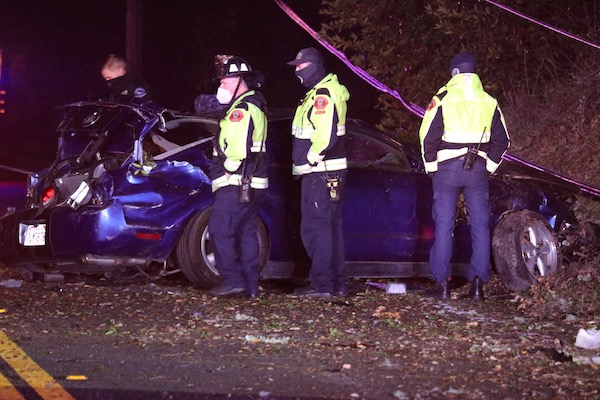 –Saturday, at about 8:17 p.m., the Atascadero Police Department and Atascadero Fire and Emergency Services were dispatched to a reported vehicle roll-over traffic collision on Hwy 41 near Frog Hollow Drive involving a blue Ford Mustang. Upon arrival, officers discovered a 59-year-old male, the sole occupant of the vehicle, had sustained fatal injuries from the collision, despite emergency lifesaving efforts made by passers-by and emergency personnel at the scene. The identity of the victim is not being released by police at this time.

Officers determined the blue Mustang was driving westbound on Hwy 41 at a high rate of speed when the driver lost control of the vehicle and struck an embankment and telephone pole.

Investigators are looking into the possibility the blue Mustang was involved in a ‘street race’ with a black or dark-colored vehicle prior to the collision. At this time, this has not been substantiated. Officers are investigating if drugs or alcohol may have also been a factor.

–The Atascadero Police Department, California Highway Patrol, and the San Luis Obispo County Sheriff’s Department responded to the scene of a fatal traffic collision shortly after 8 p.m. on Saturday evening. The collision occurred near Atascadero on Highway 41 West, near the intersection of Cholare Road.

The collision involved a 2007 blue Ford Mustang and another reported black Ford Mustang that left the scene. There were reports of two Mustangs racing in the area just before the accident. 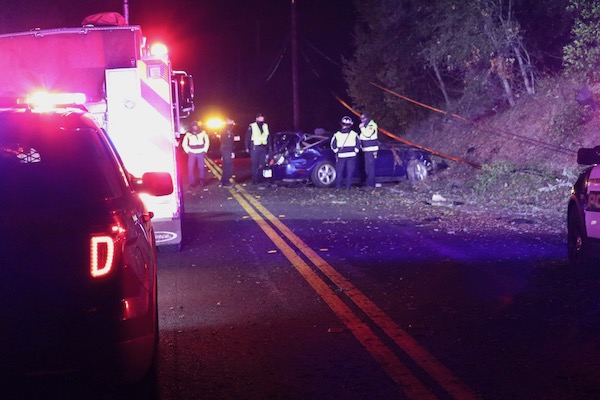 One driver reportedly hit a utility pole and cable lines dropped to the ground. When authorities arrived on the scene they found the male driver dead inside the vehicle, reports say.

Photos and report by Jason Brock.