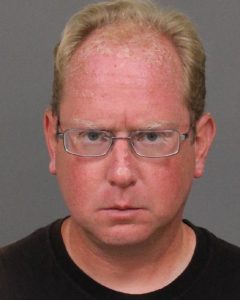 –After review of a case involving allegations of annoying or molesting a child under 18, the San Luis Obispo County District Attorney’s Office has determined there is sufficient evidence to file criminal charges against 43-year-old San Luis Obispo man Jonathan Oscar Davis for conduct in the City of San Luis Obispo occurring on June 25, 2018 at Sephora on Court Street.

He allegedly grabbed a 10-year-old girl’s hair at Sephora in the 1000 block of Court Street and left the scene when he was confronted by a witness, according to reports. A second complaint alleges Davis also touched an 8-year-old girl visiting the downtown area on Sunday.

The San Luis Obispo Police Department referred the case to the District Attorney’s Office for review of the evidence and to make a decision on whether charges can be filed.

On Thursday, June 28th the District Attorney’s Office filed felony charges against Jonathan Oscar Davis for annoying or molesting a child under 18 after having been convicted of a prior sex crime. This is a violation of Penal Code. It is also alleged that Jonathan Oscar Davis was previously convicted of felony child molestation in two prior cases in 2006, and of first-degree burglary, a violent felony, in a third prior case from 2001.

On June 29, Davis appeared for his arraignment in Department 1 of the Superior Court of the County of San Luis Obispo. At the arraignment, Defense Counsel declared a doubt as to Mr. Davis’ competency to stand trial and the Court referred the matter for a doctor’s evaluation. At the next court date, July 19, 2018, the Court will address this issue in Department 1 of the Superior Court, the Honorable Judge Jacquelyn Duffy presiding.