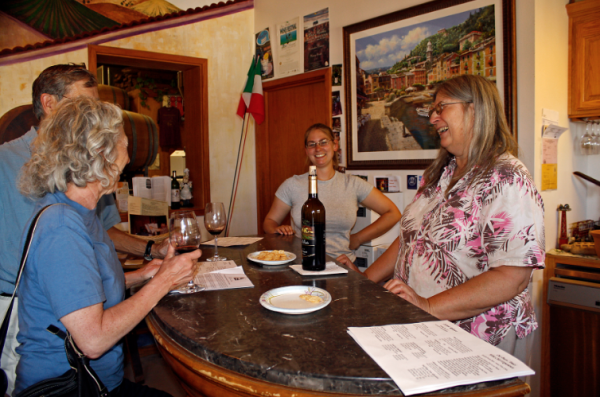 Cathy and Carol Perata pour wine in their tasting room.

Turning off of Highway 46 onto Arbor Road one enters the rolling hills of the west side of Paso Robles. The pavement doesn’t last long but don’t be afraid to continue on to the dirt lane that wends its way past acres of vineyards edged by old oak trees. This is the same path that brothers Gino and Joe Perata drove down in 1977 searching for just the right location for their vineyard. The story really doesn’t start there however, but back in Italy where Giuseppe Antonio Perata lived and learned winemaking from his father and the importance of the pairing of wine and food. That is the Italian way.

At 16 years of age, in 1930, Giuseppe came to the United States and went to farm with his uncle in Ventura County. But winemaking was always in his heart. Flash forward to his sons Gino and Joe who were following their own paths. Farming was far from Gino’s mind as he pursued a master’s degree in sociology at Washington State University, but winemaking, which he too had learned from his father Giuseppe, was a part of him. “He used to make wine in his dorm room,” commented Cathy Perata, Gino’s daughter and the present winemaker at Fratelli Perata Winery. Gino met Cathy’s mother, Carol at the University. Carol had grown up in the Seattle area. They joined with Gino’s brother Joe during the late 1970s looking for a site to put in a vineyard. “They looked everywhere on the west coast,” Cathy said, from Washington down to Temecula in California.” A drive down Arbor Road in Paso Robles gave them a good feeling and after bringing Giuseppe to view the land, they were convinced because he commented that the area reminded him of Genoa. They purchased the hillside site with the expansive view and never looked back.

A visit to the tasting room brings you to a lovely setting surrounded by vineyards with a white gazebo from which one can see views that stretch for miles. An arbor covered courtyard has seating and California quail dart to and fro along the ground. Inside the small tasting room is a mural along the back wall that depicts the vineyards, the winery, and all of the members of the Perata family involved in the winemaking process. At the tasting bar, Carol Perata pours the Italian style wines pointing out the best characteristics and indicating what foods could be paired with each selection.

Fratelli Perata vines are dry-farmed and that has produced deeply-rooted vines. They are cultivated for small berry size with a higher skin to pulp ratio that gives the wines a full flavor. Yields depend on the amount of rain that falls each year in the Paso Robles wine region. “In 2010 we had abundant rains,” Cathy said, “so that gave us a bigger yield.” The winery makes 10 varietals, one Rose, three blends, and two tiers of Cabernet Sauvignon for a total of 2000 cases a year.

“We age our wines longer,” Cathy commented, “to get higher acid and higher tannins.” When purchasing wines you are told their estimate of how long the wine can be kept in the bottle. “If you really want to learn which age of wine is best, buy a case,” Cathy said, “and open one bottle a year and drink it until you come to one that has obviously reached its peak. Then drink all of the rest of that case.” It sounds like a great idea, but, of course, you have to be young to do this since there are about 24 bottles in a case.

Members of the wine club receive printed sheets for each selection that offer information about the vintage and its quality, when it was harvested, how much alcohol it contains, when it was bottled, and its aging. On the back side of each sheet is a recipe for dishes that would be complimented by the wine. For instance, the Fratelli Perata 2010 Cabernet Sauvignon sheet contains all of that information and a recipe for their authentic beef stroganoff. This recipe is based on techniques that belonged to both Gino’s and Carol’s mothers. Then there is the 2010 Merlot with a recipe for polenta with blue cheese and the 2010 Petite Verdot with a recipe for farro with acorn squash. If this doesn’t get your gastronomic juices flowing, then nothing will!