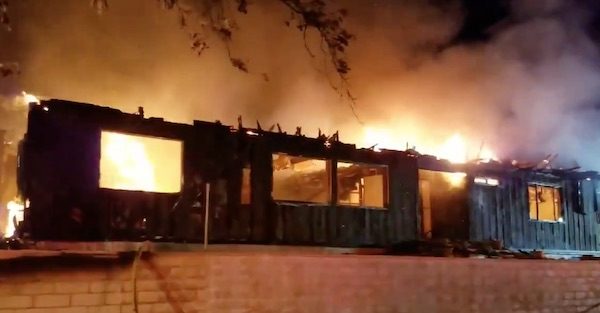 –A fire destroyed a building in San Miguel Tuesday night. The fire was first reported Tuesday afternoon at the 13000 Block of N. River Road near San Miguel. Eye witness reports say that the fire was on the former Pretty-Smith Vineyards property. Firefighters from multiple agencies responded to the scene where they found a structure “fully engulfed” in flames. The fire had begun to spread to surrounding vegetation.

North River Road was closed between Mission Lane and Cross Canyon. Firefighters were able to knock the structure fire down and mitigate the spread to vegetation. Firefighters eventually shifted operations to exterior only once it was determined that the building was a total loss. Cal Fire last posted on Twitter close to midnight that firefighters were still on the scene preventing the spread, and that “structure collapse remains a concern.”