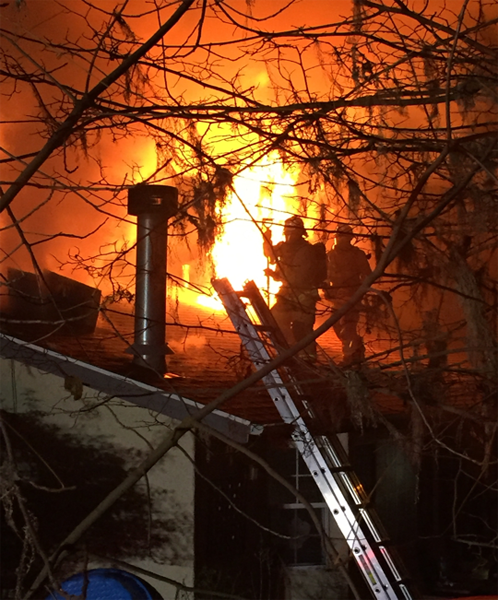 Firefighters cut a ventilation hole to contain the forward spread of the fire in the attic space. Photo and video from Atascadero Police Department.

Area of fire origin was fireplace, according to the fire department

–On Monday, Dec. 14, at approximately 7:38 p.m., Atascadero Fire Department received a report of a single story house fire at 9082 Palomar in Atascadero. The fire was reported by Gregory Baker, the property owner and occupant.

First arriving fire personnel found a single story, single family residence with heavy smoke coming from the attic vents of structures roof. The fire was spreading through the attic space and fire crews had to pull the majority of the ceiling sheet rock to contain and extinguish the fire.

There was severe fire damage to the roof and attic space and heavy water damage to the structures interior, totaling a property and content loss of approximately $85,000. There were no injuries reported.

The area of the fire origin was determined to be the fireplace. The cause is still under investigation. The fire was contained in approximately 30 minutes.

Atascadero Fire Department reminds residents to have their fire places inspected annually and chimneys cleaned on a regular basis.