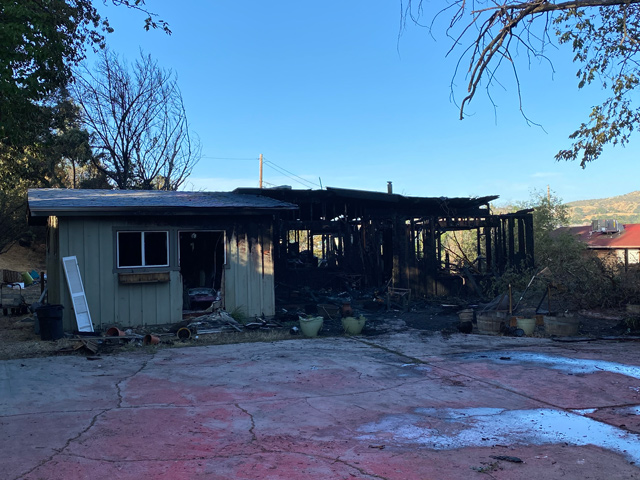 A burned home on Tuesday morning at Capitol Hill Drive and Almond Street in Paso Robles.

–The River Fire, which broke out in the Salinas Riverbed Monday afternoon, has been contained, the City of Paso Robles reports. The blaze burned 15 acres, destroyed two homes, and caused damage to nine others.

The city’s evacuation order was lifted at 3 p.m. Tuesday afternoon. “Residents may begin returning to their homes at that time,” the city report said. Street closures may still be in effect as utility crews continue to work in the area. Identification will be required to enter any areas where street closures remain.

The cause of the fire is still under investigation. Anyone with information is asked to contact the Paso Robles Police Department at (805) 237-6464.

The American Red Cross has been assisting residents day and night. “We assisted seven individuals last night with shelter,” said Red Cross spokeswoman Nicole Maul. Residents were offered local hotel rooms and food in the morning. “Since we started yesterday, we’ve had about 15 volunteers assisting,” she said. “Today we’re evaluating who needs help and how we can best assist especially as we’re seeing the damage.” 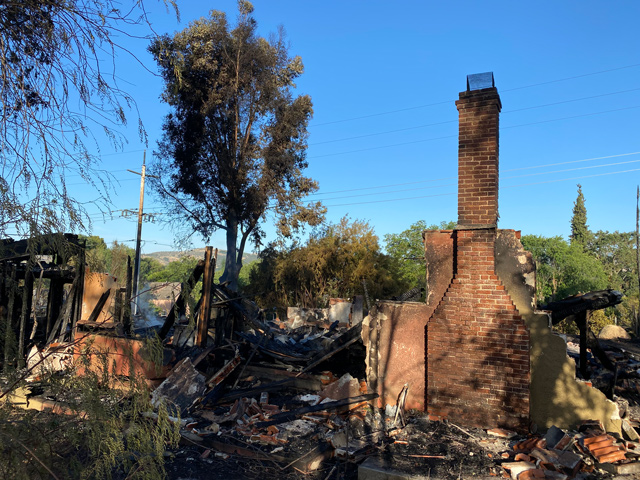 The remains of a home smoldering Tuesday morning at Capitol Hill Drive and Creston Road in Paso Robles.

–A fire that started in the Salinas Riverbed and spread to nearby homes is now 60-percent contained at 15 acres. Evacuations were still in place overnight after the fire broke out near the Salinas Riverbed Monday afternoon. The blaze started at 1:55 p.m., jumped South River Road near Creston Road in the Capitol Hill neighborhood, prompting the evacuation of 559 homes.

Two homes were destroyed, and nine additional structures were damaged, according to the City of Paso Robles. Smoke filled the skies of Paso Robles for miles on Monday afternoon.

The cause of the fire is under investigation, the Paso Robles Police Department said. “We have arson investigators on scene,” police said.  Anybody with information is urged to call the police.

The Paso Robles Fire Department was checking downed power lines on Monday evening. “These are very dangerous and the search must be conducted methodically and safely,” police said.  The fire department was also checking for hot spots. “With the winds, we do not want this to kick off again.”

By 7:20 p.m. on Monday, the fire was estimated to be 10% contained, and forward progress has been stopped, the city said. 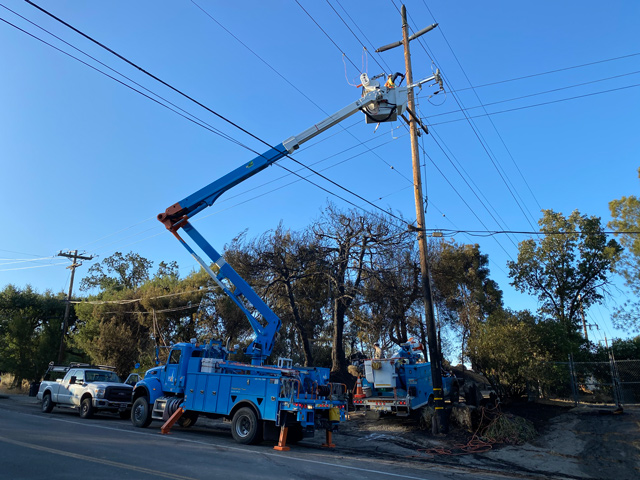 The fire was contained overnight. At 7:30 a.m. Tuesday, Creston Road was still closed from Ferro Lane to River Road, as PG&E crews worked on damaged utility poles. PG&E reported a power outage in the area with 2300 affected customers. Power was restored by Tuesday morning, the city reports.

Remaining street closures include River Road from Creston to Navajo, Capitol Hill, Elm Court, and Almond Street. The evacuation order was updated Monday night to include the reduced area bound by the current street closures and effects 98 households, the city reports. 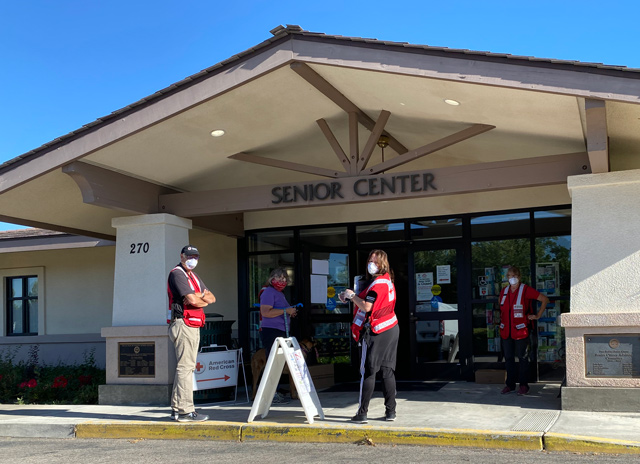 Red Cross volunteers on Monday afternoon staff an evacuation center at 270 Scott Street. About 40 vehicles were in the parking lot.

The Red Cross evacuation center remained open through the night at the Paso Robles Senior Center, 270 Scott Street. The North County Animal Hospital is able to assist with animal evacuations and can be reached at (805) 238-5882. 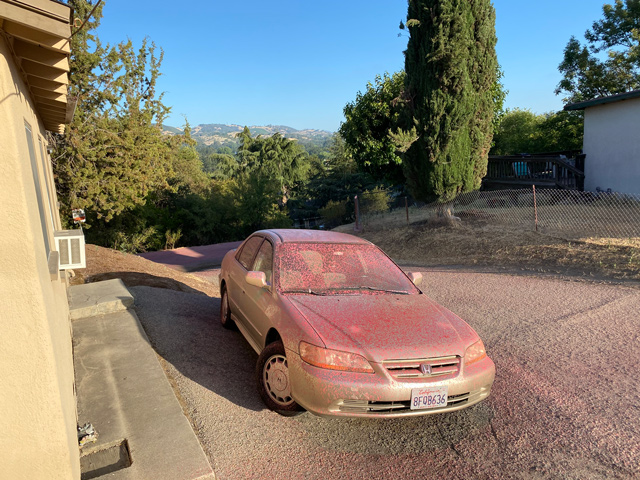 A car in the Capitol Hill neighborhood was covered with fire retardant dropped by fire fighting planes on Monday afternoon. 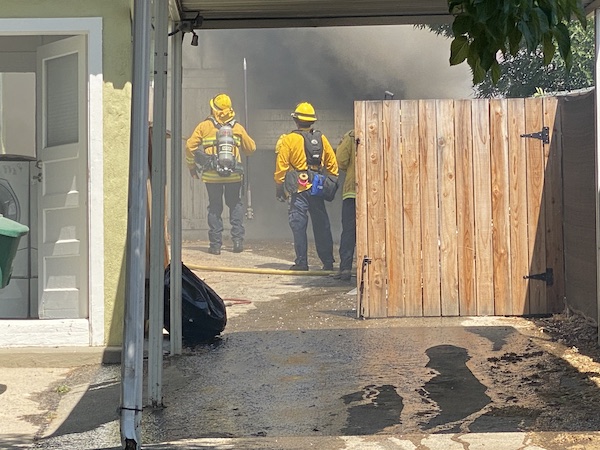 Firefighters work to extinguish a residential property on fire in the Capitol Hill neighborhood of Paso Robles off Creston Road. 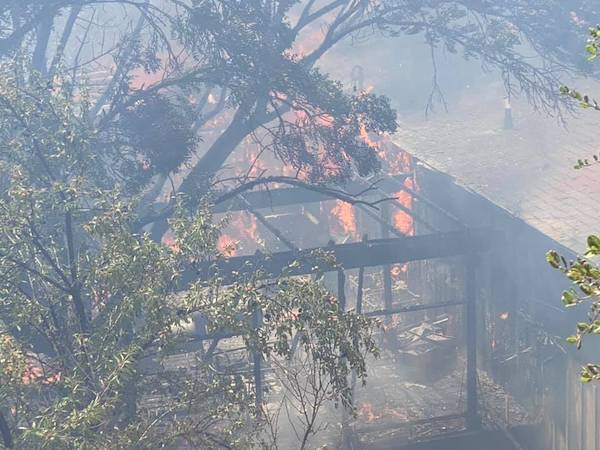 A home engulfed in flames in the Capitol Hill neighborhood of Paso Robles.

–A vegetation fire started at about 1:55 p.m. Monday afternoon in the Salinas Riverbed and has forced evacuations of Paso Robles neighborhoods. Multiple properties are engulfed in flames as the fire jumped across River Road into the Capitol Hill neighborhood off Creston Road. Hundreds of residents are being evacuated.

Several fire fighting agencies with over 100 personnel are responding to the blaze. There are multiple fire crews, engines, dozers, water tenders on the scene, with planes and helicopters dropping fire retardant from above.

River Road is Closed from Navajo to 13th and Union to Kleck Road. Creston Road is closed from the 13th Street bridge to Walnut Drive.

Local resident Paul Viborg was on the scene with his company’s water tender and said, “This is Paso Robles’ Chernobyl,” because of the dire warnings given by local residents over the fire dangers of Salinas Riverbed over the past several years.

Pacific Gas and Electric company reports that power is out to more than 2,300 homes due to the fire. PG&E work trucks were in the area evaluating the situation. 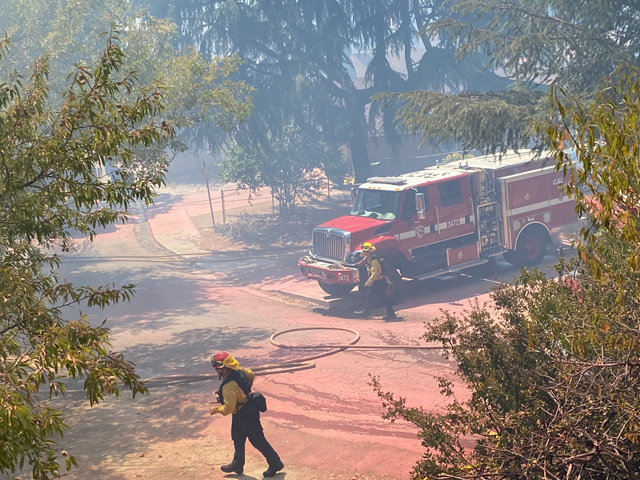 Firefighters working to stop the spread of the fire in the Capitol Hill neighborhood of Paso Robles. 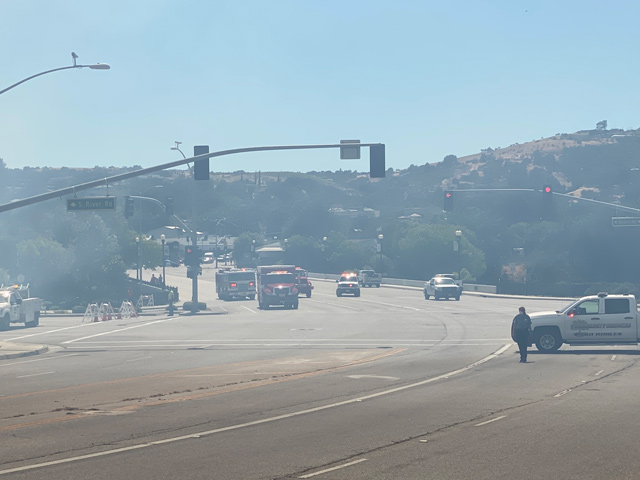 The intersection of Creston and River roads in Paso Robles is closed as smoke fills the area. 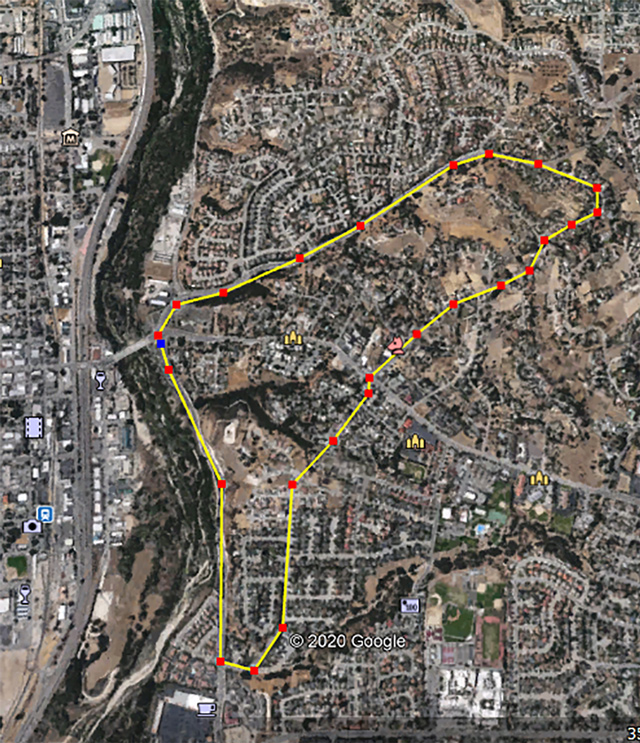 Map of areas evacuated in Paso Robles due to Salinas Riverbed fire. Map issued by City of Paso Robles at 4 p.m. on Monday.

This is a developing story. More updates will be posted.