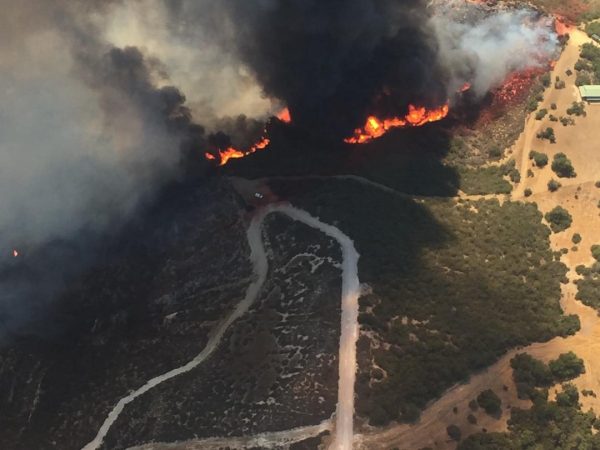 Firefighters will remain on scene removing equipment utilized during suppression of the fire and monitoring any remaining hot spots.

Cause remains under investigation

–Firefighters continue to conduct operations at the scene of the vegetation fire on Nacimiento Lake Drive near Frazier Road. The fire is now 75-percent contained, burned 86 acres of grass/oak woodlands and the cause remains under investigation, according to Cal Fire.

Nacimiento Lake Drive remains open in both directions with no traffic controls in place. Motorists are urged to continue utilizing caution when traveling in the area as fire crews will continue mop up operations throughout the day.

Those passing by the fire area may see smoke for several days as firefighters conduct operations to fully contain the fire.  Full containment is expected Wednesday afternoon.

Nacimiento Lake Drive is open in both directions

–Firefighters worked through the night to stop the forward spread of the vegetation fire at Nacimiento Lake Drive and Frazier Road. The fire is 50-percent contained, 86 acres of grass/ oak woodlands and the cause is under investigation. Nacimiento Lake Drive is open in both directions with no traffic controls in place. Motorists are urged to utilize caution when traveling in the area as fire crews will continue mop up operations over the next several days.

No homes are currently threatened

–The Frazier Fire near Lake Nacimiento at Frazier Road has been updated to 75 acres and 50-percent contained. Cal Fire crews are working to contain the fire by Tuesday afternoon, reports say.

PG&E officials monitored power lines which were under threat from fire. Some people in the area went without electricity but no homes were threatened or evacuated, according to reports.

–A call came in shortly after 2 p.m. today reporting a fire near Lake Nacimiento at Frazier Road. Cal Fire crews are currently responding.

Currently no structures are threatened, however reports says the fire is getting close to the road on Lake Nacimiento Drive.

The cause of the fire is still under investigation.