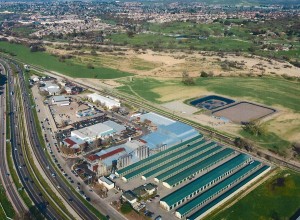 Aerial photo of the facilities, with the new ponds located behind the brewery. Photo courtesy of Alison and Matt Brynildson.

“We finally turned the corner from the disaster that crushed us these past weeks,” said brewery co-owner Adam Firestone.

Firestone noted that the first pond went aerobic on April 22, followed by the second pond last week—signifying that the ponds have reached the specifications of their full design, comparable to any other properly functioning wastewater pond. A sufficient level of oxygen is now present in both ponds, neutralizing the troublesome organic odors, according to the brewery.

On-site treatment is mandated by state law, and the ponds were designed, engineered and permitted over the past two years. After commissioning in March, things did not go as planned, said Firestone. The organic load of brewer’s yeast and grains overwhelmed the ponds’ aerators, and insufficient water exacerbated the issue. The ponds went “septic,” with foul-smelling bacteria turning the ponds into liquid compost piles.

“All the engineers involved—including both the original designers and the fix-it teams—felt this situation was unprecedented,” Firestone said. “But we are not finger pointing, the responsibility was ours. Our energies were directed at fixing the problem and bringing the best science and technology available to prevent it from repeating.” Firestone commended both the city of Paso Robles and the community for their tough love over the past two months.

“We heard every complaint loud and clear,” he said. “The city and regulators were tough on us, as they should be. Our neighbors were irked, which is more than understandable. But no one gave up on us, and we are grateful for that. It’s a testament to the character of this community.”

For quality septic service in Paso Robles, Ingram and Greene Sanitation is an excellent provider