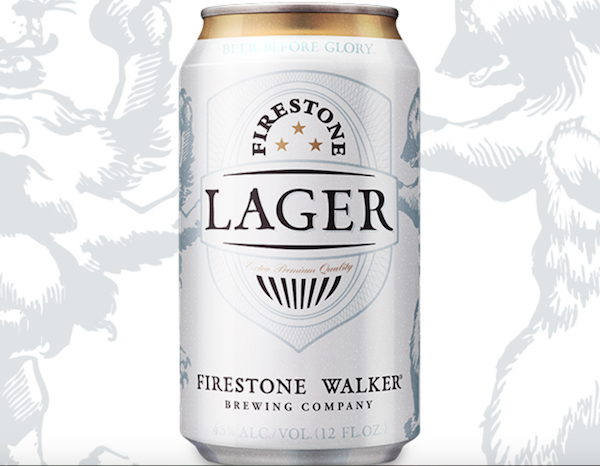 –Nearly 18 years after the release of the original Firestone Lager, Firestone Walker Brewing Company is bringing it back—new and improved—for those who finally want a better lager.

“Our original Firestone Lager came out in 2000, but it proved to be ahead of its time and it eventually got squashed by the hoppy beer craze,” said Brewmaster Matt Brynildson. “But now that people are finally coming around to the idea of craft lager beers, we felt it was high time to revisit and reinvent Firestone Lager.”

The result is a next-generation lager that is impeccably brewed, impossibly smooth and uniquely easy to drink. Firestone Lager is now available at all Firestone Walker locations, and is rolling out this week across the Central Coast and beyond in both draft and six-pack can (12-oz) formats.

Firestone Walker officially introduced Firestone Lager to the local community at Studios on The Park in downtown Paso Robles on Wednesday, March 7.

“This is a beer with deep local roots, so we thought it would be fun to do something special for our friends in the community,” Brynildson said.

Hard to make, easy to drink

The irony of Firestone Lager is that while it’s Firestone Walker’s easiest beer to drink, it is the hardest one to make. “This beer demands technical perfection from our entire team, from the brewhouse to the lab,” Brynildson said. “When brewing a lager beer, you’re working with this bright, transparent canvas that will reveal the smallest flaw.”

Brynildson said that the completion of Firestone Walker’s state-of-the-art brewhouse extension last summer helped drive the dream of revisiting the lager style. “We have the team and now the tools to execute on this pursuit of the perfect lager—which I think is every brewmaster’s dream,” he said.

Around the brewery, Firestone Lager is being called the “unicorn” beer.

“It’s this idea of something that a lot of people don’t think exists—a beer that offers the same easy-drinking attributes of mass domestic lager, but with pure craft quality and an all-malt pedigree,” Brynildson said.

He added that while Firestone Walker remains at full throttle with its IPAs and other hop-driven beers like Pivo, Firestone Lager fills a void in the brewery’s portfolio and provides a bit of a break for both the palate and the mind.

“At the end of the day, Firestone Lager is made for drinking, not thinking,” Brynildson said. “It’s all about enjoying a good, clean beer.”