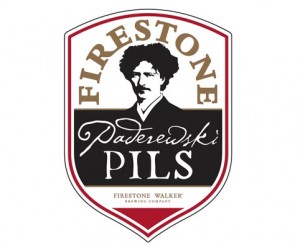 –Ignacy Jan Paderewski is an icon of Paso Robles history – and now he will be celebrated with a locally brewed, Polish-style pilsner to commemorate the festival held in his honor.

Produced by Firestone Walker Brewing Company in collaboration with the 2015 Paderewski Festival, the limited edition “Paderewski Pils” was dry-hopped with Polish hops, and then kegged without filtration.

A specially designed logo features an image of Paderewski and incorporates colors from the Polish flag. It will be featured on tap handles and Pilsner style glasses that are being produced for the festival. Held Nov. 5 – 8, the 2015 Paderewski Festival features concerts, film screenings, youth piano recitals and lectures at various venues throughout Paso Robles.

Hailed around the world as a virtuoso pianist who was one of the most recognizable figures of his day, Paderewski is also remembered as an accomplished composer, generous humanitarian, skilled politician and great Polish patriot. He traveled regularly to Paso Robles starting in 1914, and ultimately became a local winegrower and vintner.

“We thought that a local beer brewed in a Polish style would be a fitting tribute to Paderewski, a man who bridged cultures and embraced the Central Coast,” said Jamie Smith, Firestone Walker’s marketing director.

“We’re thrilled with this special beer that honors Paderewski,” said Joel Peterson, board member of the festival. “What a fun and unique way to bring our history to modern day Paso Robles.”

“When you go the unfiltered route, you get this soft mouthfeel, and the hop aromas really pop out of the glass,” Brynildson said. “Leaving the beer unfiltered and serving it in a draft format is also how the beer would have likely been served in Paderewski’s day. Dry-hopping with Lubelski and Marynka will also give the beer a distinctive profile. Pilsner is one of the primary beer styles of Poland, as inherited from Bohemia. With Paderewski Pils, we wanted to blend both old and new world pilsner styles into one special beer.”