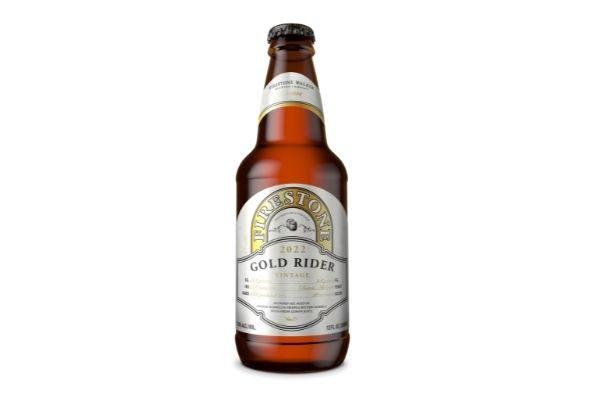 – Firestone Walker’s barrel-aged vintage series rolls out its next cocktail-inspired beer with Gold Rider, a high-concept hybrid ale modeled after the sidecar cocktail.

“My love for the sidecar cocktail goes right in line with my appreciation for Cognacs,” said Barrel Program Manager Eric Ponce. “This is a beer I’ve long wanted to make, and I finally got the perfect barrels to do it.”

The story of Gold Rider began when Ponce and his team brewed a base beer with an infusion of Central Coast white wine juice. After fermentation, they aged the beer in 500-liter XXO French cognac barrels for two years, with a separate portion matured in orange bitters barrels.

Finally, they incorporated a touch of fresh-squeezed lemon juice to elevate the experience with citrusy acidity. The result is a distinctive barrel-aged beer whose ingredients and flavors faithfully mirror the experience of enjoying a classic sidecar. Aromas of lemon, vanilla, and toffee mingle with hazelnut and honey flavors along with a lively, vibrant mouthfeel.

The cognac barrels—all aged 14 to 20 years old—imparted a high-end character that ultimately defines the Gold Rider tasting experience. “These ‘extra extra old’ barrels come from one of France’s great cognac houses,” Ponce said. “You get this refined cognac character that can only come from barrels like these.”

The traditional sidecar is made with cognac, orange liqueur, and lemon juice. The origins of the cocktail are unknown, but it is thought to have been invented in London or Paris around the end of World War I. It was named after the sidecar passenger motorcycle attachment that was popular at that time.

For Ponce, his affection for the sidecar is personal. “This beer is inspired by my grandmother,” he says. “She always had a bottle of cheap brandy and would only sip some on Sunday evenings, always straight. As I got older, I acquired a taste for Armagnac and cognac and the cocktails made from them. I persuaded her to give them a taste. Today, my grandmother still takes her brandy neat, but now she also lets me make her a sidecar when I visit.”

Gold Rider lands as the latest release from Firestone Walker’s Vintage program. This program began in 2005 with the creation of the brewery’s first Anniversary Ale barrel-aged blend. Ever since, the resulting beers have flown under the banner of the Vintage series, which has become one of the most extensive spirits barrel-aging programs in the craft industry.