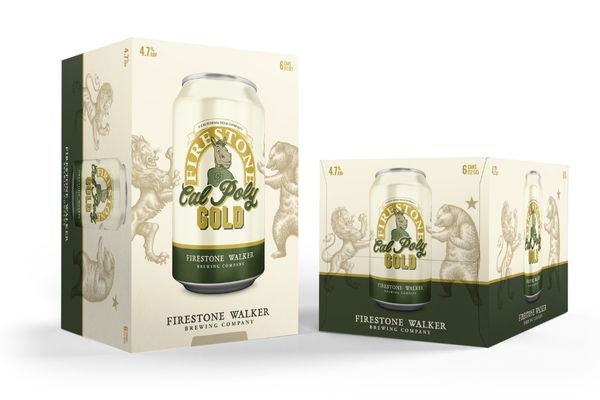 Cal Poly Gold will debut at the Cal Poly Mustangs’ first 2022 home football game on Sept. 10 and will continue to be available at all Cal Poly Athletics events where concessions are sold. It will also begin rolling out next week in a six-pack (12-ounce cans) and draft formats as a year-round offering across San Luis Obispo County and into Santa Maria. It will also be available at Firestone Walker’s main brewery in Paso Robles.

“Cal Poly graduates have always played a vital role in the ranks of our brewing team and elsewhere in our brewery,” said brewery co-founder David Walker. “Like us, Cal Poly is passionate about the brewing sciences and craft culture, and this collaboration is the latest example of how we support each other.”

Cal Poly Gold is the latest step in a longtime relationship between Cal Poly and Firestone Walker Brewing Company, according to Cal Poly Athletic Director Don Oberhelman, and will have “a variety of positive impacts.” Proceeds from all concession sales at football games and other sporting events will help fund student-athlete scholarships and will help provide new, “Learn by Doing” internship opportunities for Cal Poly students.

“Firestone Walker is one of the best breweries in the world and has hired many Cal Poly alumni and benefited directly from the university’s renown for producing graduates who are primed for success,” Oberhelman said. “It made perfect sense for us to further unite the excellence of our respective institutions to create this new beer. I am confident our fans and alumni will absolutely love Cal Poly Gold. I am very passionate about this relationship and the mutual opportunities we will enjoy with our friends at Firestone Walker, and I am excited to see how this friendship and relationship will grow to benefit our entire community.”

Cal Poly Gold is an all-malt lager brewed with noble hops. According to Firestone Walker Brewmaster Matt Brynildson, Cal Poly Gold was a collaboration every step of the way, from shepherding the idea with the university to reaching a consensus among the brewing team.

“We have a myriad of Cal Poly grads on the brewing and marketing teams who had a hand in formulating and making this beer,” Brynildson said, noting that the can artwork was designed by Cal Poly alum and Firestone Walker Art Director Alyssa Hornby. “We collectively decided that this should be a light, sessionable beer, in contrast to something hoppy or heavier. So, we created Cal Poly Gold as a crisp, refreshing, easy-drinking lager that’s perfect for enjoying the SLO life.”