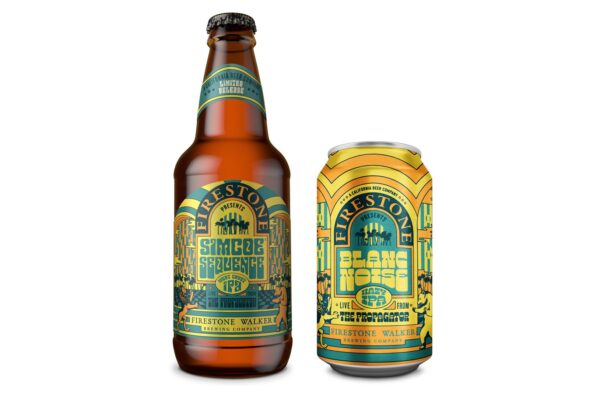 – Firestone Walker has introduced two new brews, “Blanc Noise” and “Simcoe Sequence”—two new Propagator Series offerings available exclusively in the brewery’s latest IPA Mixed Packs. Marking a departure from the single-hop origins of the Propagator Series, these new IPAs feature blends of some of the brewing team’s favorite new-age hops. The beer names not only reflect the dominant hops in each blend, but also give a nod to the longtime musical fascinations of Brewmaster Matt Brynildson.

“I love the idea of showcasing some of our favorite hops in a way that not only creates an amazing beer but also educates the beer lover and helps them get to know these different varieties,” Brynildson said.

Conceived at Firestone Walker’s Propagator R&D brewhouse in Venice and perfected at the main Paso Robles brewery, these IPAs are a “taste of what’s next from Firestone Walker,” according to the brewery. Each beer also comes with its own curated mixtape to elevate the drinking experience.

Hallertau Blanc has been a staple at Firestone Walker ever since Brynildson’s travels to family hop farms in Bavaria a decade ago. Nelson Sauvin is a newer favorite that he experienced firsthand in the fields during his more recent travels Down Under.
Blanc Noise is rolling out to all Firestone Walker markets in the canned IPA Mixed 12 Pack, joined by Union Jack, Mind Haze and the new Hopnosis IPA.

Next up is Simcoe Sequence. The brewers blended two uniquely emphatic hops to create this beer—a bold and complex West Coast IPA. The iconic Simcoe Hop combines classic Northwest notes of pine and citrus with punchy passionfruit flavors. Into this mix we included the trending Motueka hop from New Zealand, which layers in hints of citrusy lime and tropical fruit.

Simcoe Sequence is found in the limited-release bottled IPA Mixed 12 Pack, joined by Union Jack and Hopnosis. Available in California, Arizona, and Nevada.