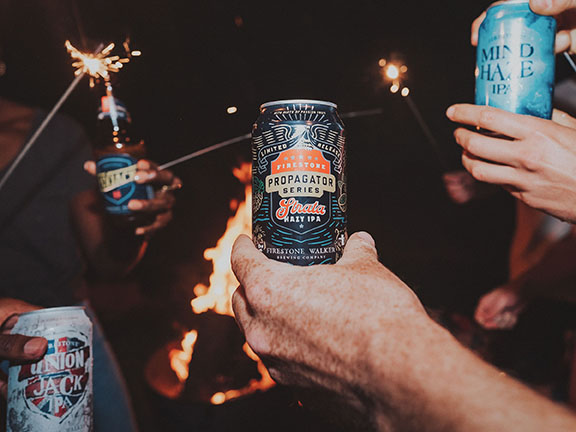 Strata originates from Oregon State University’s Aroma Hops Breeding Program in Corvallis, in partnership with Indie Hops. First bred in 2009, Strata excelled in a 9-acre test plot in 2015 and has come on strong in recent years, making it a fitting match for the Propagator Series. “Strata is distinguished by its unique melding of citrus, orange candy and passionfruit flavors with a signature Northwest dankness,” said Brewmaster Matt Brynildson. “It makes for a very full-flavored drinking experience.”

From the coast of California comes Mind Haze, a free-spirited beer made to elevate your perceptions—juicy, fresh and loaded with an imaginative array of tropical hop flavors. This is a hazy IPA done the Firestone way. Mind Haze is ultimately a beer that breaks the mold with explosive hop aromas, a luscious texture and enduring freshness.

Huge flavor that packs a punch. This is Union Jack—an icon of the West Coast IPA style, for those who like their beer loud and proud. Union Jack is the IPA that helped blaze the trail for the revolutionary West Coast style. Named for the British Lion who co-founded the brewery, Union Jack is intensely hoppy yet eminently drinkable from start to finish. A fad-proof IPA for any hop head.

No fruits, no flavorings, no shortcuts; Just the magic of 100 percent natural hops—this is the Luponic Distortion IPA rotating hop series. Each Luponic Distortion release features a new hop blend with a focus on emerging and experimental cultivars. Luponic Distortion No. 18 showcases a blend of four New Zealand-grown hops—Nectaron, Nelson, Motueka and Riwaka—for a uniquely fruity and complex flavor profile.