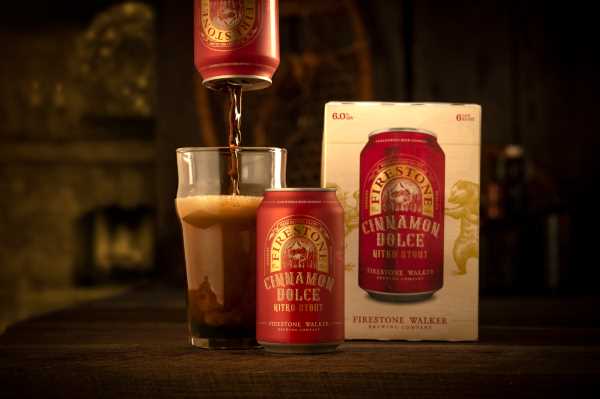 “Every year, we get to play around with creating a seasonal stout, and this time we went in an entirely new direction inspired by locally sourced vanilla beans,” said Brewmaster Matt Brynildson. “Vanilla is a flavor that just plays so well with stouts, and adding a bit of cinnamon makes it all the more fitting for fall and winter.”

The base stout is brewed with dark-roasted specialty malts that impart hints of caramel and chocolate. The beer is then infused with the cinnamon and vanilla beans. Finally, the beer is nitrogenated for a creamy, velvety texture.

The result is a uniquely delicious stout with all of the festive spice and smoothness one could want from a fall-winter seasonal. Cinnamon Dolce Nitro Stout is now rolling out to all Firestone Walker markets in six pack (12-ounce can) and draft formats. It is also available at all Firestone Walker brewery locations.

When Brynildson first went on the hunt for premium vanilla beans, he was surprised to find the ultimate source right in the brewery’s hometown of Paso Robles.

“I discovered that there’s a local family that has been in the vanilla business since 1918 under the banner of Cook Flavoring Company,” Brynildson said. “They operate out of an unassuming building, but they are renowned far and wide for their vanilla beans and other flavorings and extracts.”

Third-generation vanilla purveyor Josephine Lochhead educated the brewing team on all things vanilla and steered them to cured Madagascar-grown beans that were perfect for incorporating into a seasonal stout.

“Vanilla is a flavor amplifier, and the key is to use it in balance to enhance everything else that is going on in the beer,” Brynildson said. “Adding a bit of cinnamon makes for a really nice wintertime combination that provides a balancing point with the chocolaty character of the stout.”

Simpsons Special Dark caramel malt from the U.K. adds a caramelly and raisiny quality to the beer, while roasted barley from Briess Malt Company in Wisconsin layers in smooth cocoa flavors. Finally, nitrogenation brings everything together with a silky mouthfeel.

“I think we landed on a really unique stout,” Brynildson said. “You get a true nitro experience straight out of the can, and the flavors are seamless and complementary. It fits the season perfectly.”