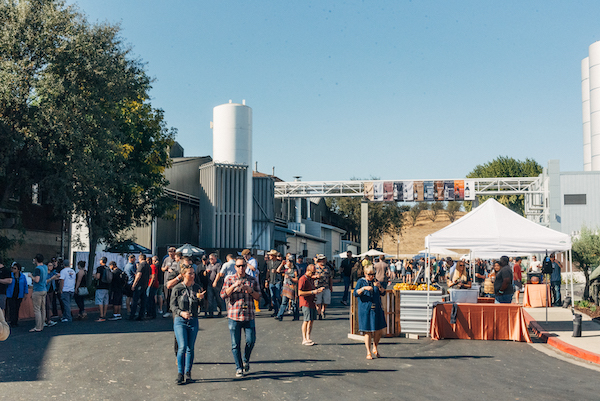 –Firestone Walker Brewing Company is rolling out the barrels for its 2019 Anniversary Block Party on Nov. 2, to include the unveiling of “XXIII”—the brewery’s latest Anniversary Ale blended with the help of local winemakers.

“This block party coincides with the end of a busy brewing year and the completion of harvest for our winemaking friends,” said David Walker. “It’s a time to celebrate with our latest Anniversary Ale, a unique blend of the best barrel-aged beers.”

The open-air, walkaround party takes place at the brewery campus in Paso Robles. The festivities will include tastings of the various component beers used to blend XXIII, six-year vertical tastings of earlier Anniversary Ales (XIV to XIX), other limited barrel-aged beers; light bites by Firestone Walker Taproom Chef Justin Lewis, a dessert pairing by Just Baked, and live music by Raised on TV.

Tickets to the Anniversary Party cost $95 or $175 and include six take-home bottles of XXIII ($95 option) or 12 bottles of XXIII ($175 option), as well as a commemorative tasting glass. XXIII will also be available in single boxed 12-ounce bottles ($12.99) at all Firestone Walker locations starting on Saturday afternoon and will begin rolling out to select accounts starting next week.

XXIII is a blend of six distinct beers aged in spirits barrels, including bourbon and tequila barrels.

The Anniversary Ale blending session has become an annual late-summer rite at the brewery, and the 2019 session took place on September 10 with more than 20 winemaker participants in attendance.

To create the beer, the winemakers were divided into teams. Each team created its own preferred blend from numerous components, and then all of the blends were blind-tasted by the group to determine the favorite. The winning blend became the basis for XXIII, signifying Firestone Walker’s 23nd year on California’s Central Coast.

For the second year in a row, the winning team included Terry Hoage, Will Freeman and Phil LaMontagne of TH Estate Wines, as well as Sherman Thacher and Daniel Callan of Thacher Winery. They once again walked away with the coveted “cardboard crowns” that are accorded to the winners each year.

“Winemakers are practicing experts in the art of blending, which is why we have sought their involvement ever since making our first Anniversary Ale in 2006,” said Brewmaster Matt Brynildson. “XXIII is super elegant and seamless. The component beers just flow together in a way which no single beer could have accomplished.”