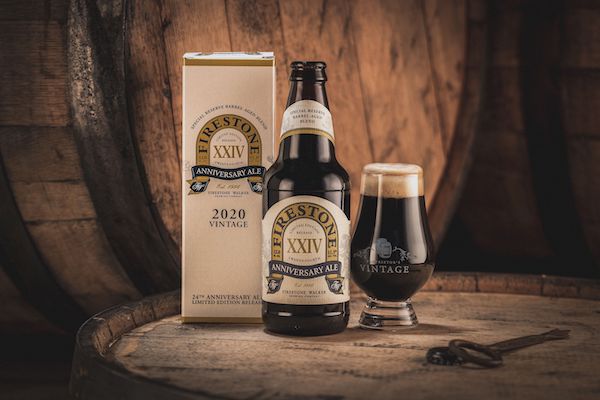 –Firestone Walker Brewing Company invites locals to be among the first to taste XXIV—the brewery’s latest barrel-aged anniversary ale blended with the help of local winemakers.

XXIV is being released today at all Firestone Walker locations, and the Taproom restaurant in Paso Robles is marking the occasion by offering an “Anniversary Ale Vertical Tasting” featuring XXIV along with anniversary ales from the preceding three years.

“Winemakers are practicing experts in the art of blending, which is why we have sought their involvement ever since making our first Anniversary Ale in 2006,” said Brewmaster Matt Brynildson.

Each year, the winemakers break into teams; create their own preferred blends from several barrel-aged component ales; then vote as a group on the winning blend—which then becomes the next anniversary ale.

The result this year is XXIV—a masterwork of richness and complexity, blended from six distinct ales aged primarily in bourbon barrels, with a small portion aged in tequila barrels.

This year marked a change in the blending process. Instead of hosting the usual group gathering, the brewery safely delivered the component ales to the participating winemakers for remote participation.

In addition to offering the new Anniversary Ale Vertical Tastings, the Taproom restaurant is open for both dine-in and takeout.