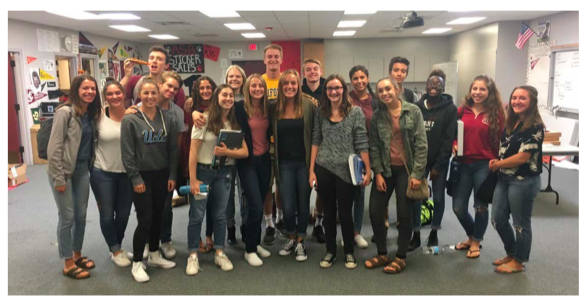 –The Superintendent’s Advisory Board (SAB) held its first meeting of the school year earlier this week. The SAB was created in 2014 by Paso Robles Joint Unified School District (PRJUSD) Superintendent, Chris Williams, to give high school students an opportunity to share their ideas and communicate directly with him.

This year’s SAB is composed of 21 students ranging in grade level from freshmen through seniors. Four returning members will be leading this year’s group: Gabriella Clayton (president), Marshall Wiesner (vice president), Torri Pugh (secretary), and Lily Seebart (directory of communications). These students created an application for new members and then selected the team that would be serving for the 2017-2018 school year.

The SAB is composed of students who have various interests and are involved in a variety of clubs, sports, arts, and other groups on campus. At the first meeting, students brought up issues that they would like to tackle this year. One of those concerns is that students are not given time in class to watch the daily video announcements and therefore feel uninformed about events. Another topic discussed was adding more lockers because of the increase in the number of students. The SAB also talked about wanting more information on A-G courses and other requirements for college and providing more help to new students who transfer to the high school.

The SAB is a true student-led group that has been responsible for many changes in the last three years. Some of the group’s accomplishments include adding more counselors and academic intervention, adding more advanced placement courses and dual enrollment courses, and providing Chromebooks for all students to use at school and at home. Water refill stations, at the request of the SAB, were added to the campus and have since been added to other sites as well.

And perhaps the biggest success that will have the greatest impact on students was the input that the SAB had in creating the PRJUSD Guiding Principles. The SAB was adamant that the words “every student” be used throughout and that the focus of the district be on the success for all students.

The SAB meets monthly with the superintendent and they are working together to continue to build relationships within the school and community. “The voice of the students is invaluable,” says Mr. Williams. “It continues to motivate and inspire me and drives what we do organizationally based on the need of every student.”