Five friends find an excuse to race at NOLA 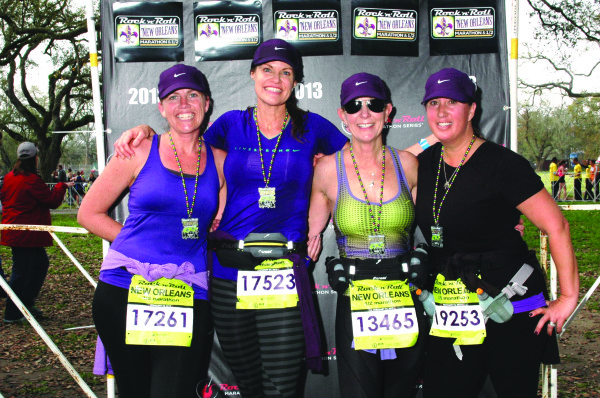 Five Friends find an excuse to race at NOLA

By Patty Nadeau
It all started with a bucket list, five girlfriends, running shoes and a plane ticket to New Orleans. Five women, but all sharing the singular goal of supporting one amazing friend. Heidi Wicka had decided that she would run but a single marathon in her lifetime, thus it best be someplace memorable. So when she told us that she had selected New Orleans as THE marathon, how could we not go to support her? Right? New Orleans, AKA NOLA, with Bourbon Street, great food, incredible history, and music that people live a lifetime to hear.

This adventure starts right here in Paso. Featured previously in Active, the Run Paso group of ladies includes a very diverse set of runners with all sorts of objectives. Everyone has something they want to accomplish thanks to the guru who started it all, Dagny Petersen. She, in fact, started the marathon spark in Heidi… “You can do this.” And so, our “bucket lister” took on the task, because she had to at least try.

Preparing for a half marathon is one thing. But a full marathon is a different animal. It takes over your life, so it better be for something worthwhile. In come the other four ladies; a physically diverse yet bonded group. One with knees that never thought they would allow her to run again, one that had never run anything more than a 5K, one who said she was done with “long runs”, and the one that just wanted to be there to support and cheer! Oh, and eat. Did I mention that we like to eat? We run to eat because we are “foodies” after all. Yep, the attraction was first support and second consumption.

The NOLA Full and Half marathon run through the breathtaking Garden District, so naturally we thought it appropriate to begin our consumption by “carbo loading” the day before the race at the Jazz Brunch at Commander’s Palace, also located in the Garden District. It was an incredible gastronomical start to our week and a sign of things to come.

The weather for race day, February 24th, was perfect. Dry and low 50’s at start time. The vibe and energy was electric. Mardi Gras was just a few weeks prior so beads hung in the trees and decorations on the buildings were still abundant. This is a well-run event with fuel stations all along the route filled to capacity with cheering volunteers, live music to entertain the runners every few miles and an epic finish location that makes you smile just to see it ahead of you.

The four half marathoners, Becky Gray, Sabrina Kruse, Anna Peschong, and myself, finished in such great spirits except for Anna as Planter Fasciitis had reared it’s ugly head during training, but she powered through to the finish! A few of us even thought, “Wow, maybe I should continue on with Heidi for a bit.” But we kept our wits about us and sent our Bucket Lister on her way. She finished strong too. Not a limp or ache evident. Just a little emotion after crossing the finish line because, well, that check mark was done!

The remainder of the week (yes, we stayed a full week after the race!) included a cemetery tour, a Garden District Tour and many food/beverage experiences. Here are some just to name a few: Emeril’s (oh yea!), Galatoire’s, Acme Fish Company, Brennan’s, the Carousel Bar at Hotel Montelena, and of course Hurricanes at Pat O’Brien’s. Oh, and did I mention our apartment overlooked the State House so we had a bird’s eye view to the swearing in ceremony of the first Louisiana African American female to the State Supreme Court? Spectacular.

It was the trip of a lifetime. When Heidi posted her run to Facebook and a fellow runner asked where the next marathon would be she replied, “Done! 26.2. Never again.” And I believe her. Well, unless we need her to be our excuse to head back to the Big Easy.