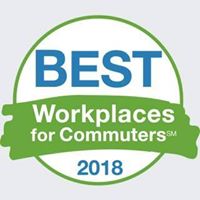 – Best Workplaces for Commuters, the national authority on recognizing and assisting workplaces that provide exceptional commuter benefits to employees, in partnership with Rideshare’s Back ‘N’ Forth Club, the region’s employer commute program, announced that Cal Poly, Caltrans, Morris & Garritano, San Luis Obispo Council of Governments (SLOCOG), and SRAM have been awarded the 2018 National Standard of Excellence by Best Workplaces for Commuters for offering exceptional employee-provided commuter benefits.

These five local employers join 234 workplaces in the United States that have committed to employee-provided commuter benefits that result in at least 14 percent of their employee base not driving alone to work within a 12-month period.

“These five employers are on the cutting edge of a national movement,” said Julie Bond, Program Manager, Best Workplaces for Commuters. “They have listened to their employees’ challenges with traffic congestion and their concerns over reducing emissions. By offering a range of commuter benefits such as subsiding bus fares, carpooling programs and access to Emergency Ride Home programs, these five employers give their employees the support they need to get to and from work so they can be at their best. These benefits are good for each company and its employees.”

“It’s important to maximize the efficiency of our region’s roadways by continuing to help commuters find smart commute options,” said Peter Williamson, SLOCOG’s employer commute program coordinator. “Our Back ‘N’ Forth Club employer commute program gives local employers the tools and support they need, no matter their size or location, to encourage smart commute choices.” Mr. Williamson continued, “In a time of growing demand on our transportation system, efforts like these by local employers are even more impactful.”

About the Back ‘N’ Forth Club
A division of the San Luis Obispo Council of Governments, SLO Regional Rideshare provides programs for commuters, employers, youth, seniors and visitors. The Back ‘N’ Forth Club, the employer commute program of SLO Regional Rideshare, is dedicated to reducing the number of single occupant vehicles on San Luis Obispo County’s roads and highways, helping commuters save money on gas, and making it easier to get to work or school. The program works with employers to offer several commuter tools, incentives, and services, including regionally funded vanpool subsidies, Guaranteed Ride Home incentives, carpool matching, monthly sweepstakes, and other incentives at iRideshare.org. The program also offers free bike locker access at park and ride lots throughout the county. For more information about the Back ‘N’ Forth Club, visit SLO511.org or call 511.