Flamson Cougars take a bite out of local hunger 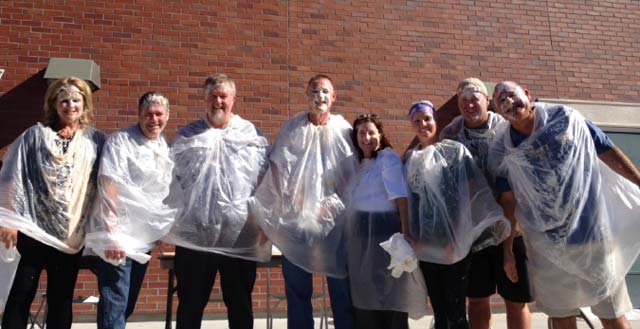 The students at Flamson Middle School, home of the Cougars, accepted from Lewis Middle School a challenge of raising $1,000 for charity. With the goal of giving back to the local community, Flamson’s students and staff selected the SLO Food Bank Coalition as the recipient for the donations. Selected staff members, district administrators, and the president of the board for SLO Food Bank volunteered to receive a pie in the face if the students reached their goal. 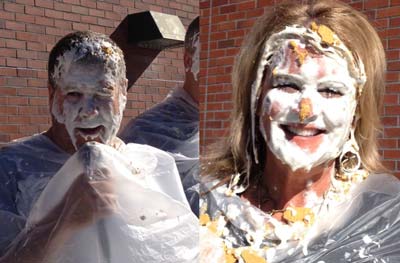 On Thursday the school exceeded their goal by raising $1,279 for the SLO Food Bank. Consequently, at 12:30 p.m. that day, a group of dedicated employees took a pie to the face to take a bite out of hunger. Participants included the principal, Gene Miller, the vice principal, Pam Hernandez, teachers Richard Griffin, Tori Loney, John Hutchings, Tammi Barker, Robert Springer, and district directors Paul Press and Ashley Lightfoot.

“We want to instill in our students the idea of giving back to the community in which they live”, said Miller. “We want to teach our middle school students not only the academic knowledge and skills that will make them ready for college and career, but also to be active participants in the community they will call home after they leave Paso Robles schools.”

Miller said that each morning at Flamson, as part of their character education, the staff reads to the students “Words of Wisdom”.

SLO Food Bank Coalition President Ed Railsback thanked the school’s efforts. “Your efforts and donations [help] to meet our goal of eliminating hunger in our county. We are truly blessed to live here and the abundance we enjoy should be shared,” he said. “Thank you to the students of Flamson Middle School and their supportive parents, and a special thank you to my colleague Gene Miller and his staff. There are hungry people who thank you as well.”

Founded in 1989, the SLO Food Bank Coalition distributes 400,000 pounds of food annually through 20 non-profit agency partners. Each year approximately 6 million pounds of food, half of which is fresh produce, is distributed through more than 200 non-profit agencies including groups like homeless shelters, food pantries and senior centers. The mission of the SLO Food Bank Coalition is to work with a network of community partners to alleviate hunger in San Luis Obispo County and build a healthier community.