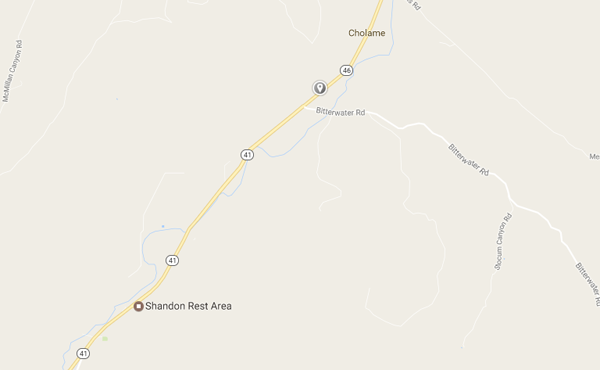 Charles Scovell in a 2015 booking photo.

–Charles John Scovell II, a former Atascadero mayoral candidate, suffered major injuries after police say he attempted to rob Heritage Oaks Bank in Paso Robles and then subsequently led police on a car chase on Highway 46 and crashed in the area of Bitterwater Road in Kern County.

On Friday at approximately 2:20 p.m., the Paso Robles Police Department received a 9-1-1 call regarding an armed robbery in progress at the Heritage Oaks Bank in the 500 block of 12th Street. The caller stated she was a customer in one of the bank’s drive through lanes and she was observing another drive through customer yelling at the bank teller, attempting to force the bank teller to give him money.

The witness provided a description of the suspect and his vehicle, and as police officers arrived on the scene the suspect was driving away. Officers followed the suspect as he drove to 13th Street, where officers attempted to stop the vehicle. The suspect got out of his vehicle, then got back inside and drove off northbound on Spring Street with officers in pursuit. The suspect continued eastbound 24th Street and on to eastbound Highway 46E. The pursuit continued out of the Paso Robles city limits and was turned over to the California Highway Patrol. An officer from the Paso Robles Police Department trailed the CHP units until the suspect vehicle crashed in the area of Bitterwater Road in unincorporated Kern County.

Scovell suffered major injuries in this solo vehicle collision and was transported via helicopter to an area hospital. The vehicle he was driving was an unreported stolen vehicle, according to police Scovell will be facing charges of attempted robbery, terrorist threats, auto theft, and evading arrest.

The Paso Robles Police Department is continuing to work with the California Highway Patrol on this investigation. There were no injuries during the attempted robbery and no money was turned over to the suspect.

In November 2014, Scovell challenged incumbent Tom O’Malley for the mayoral seat. Though Scovell lost, he received 40 percent of the vote. He also works at Charlie Scovell Tree Service in Atascadero.