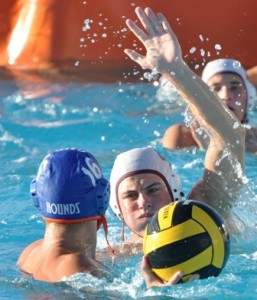 Moore, a 2013 graduate of Paso High, recently signed his National Letter of Intent to swim at New Jersey Institute of Technology – he was a two-sport standout in water polo and swimming as a Bearcat.

Moore, a 2013 graduate of Paso Robles High School, was a two-sport standout in water polo and swimming. He was a three-year varsity swimmer and received All-PAC 7 League honors in his junior and senior years. As a junior, he was a CIF-SS Division 2 finalist in the 100 butterfly event, and was named team Most Valuable Swimmer. In his senior year, he received All-PAC 7 League honors in the 100 butterfly and 200 freestyle, and was again a CIF-SS Finalist in the 100 butterfly. Moore was also named Team Captain, Most Valuable Swimmer, and was the PRHS Scholar-Athlete of the Year.