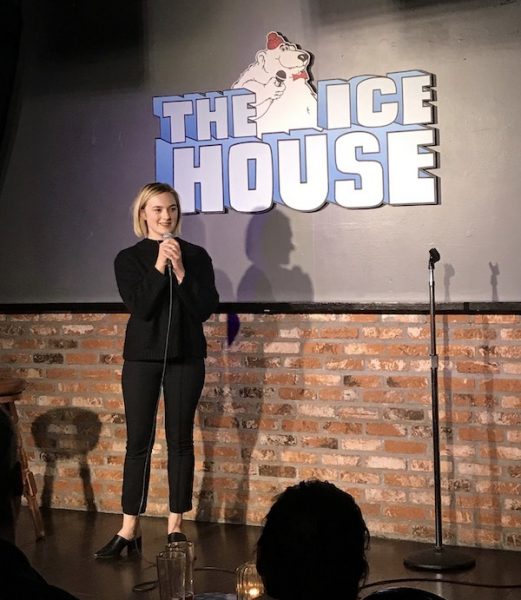 –Former Bearcat Shelby Reneau performed stand-up comedy this week at The Ice House in Pasadena. Reneau was the headliner in a comedy show that featured ten comedians each performing a ten-minute routine. The 65-year-old producer of Sunday night’s show put Shelby last in the line-up to end the show on a positive note.

Shelby Reneau graduated from Paso Robles High School in 2012. After attending college and working as a barista at Spearhead Coffee on 13th Street, she moved to LA. That’s when she decided to pursue stand-up comedy. The 25-year-old comedienne started performing during “open mike” at LA comedy clubs. She gradually developed her routine from everyday life experiences. She continues to perform at open-mike events to refine new material.

Her parents, Scott and Emily Reneau have traveled to LA to see her act. Scott said, “Initially, she didn’t want us in the audience, but she’s more comfortable now. Fortunately, she does not tell raunchy stories or use salty language. She tells me that she heard so much off-color humor and gratuitous profanity at home as a child that she finds it boring.”

Sunday night at The Ice House, ten comedians performed for ten minutes each. A flashing red light at the rear of the auditorium signaled when their allotted time had expired. For some it was a long, painful ten minutes without audience approval. Sunday night, Shelby closed the show with the audience laughing heartily. As the producer hoped, she sent the Ice House crowd home with a smile.