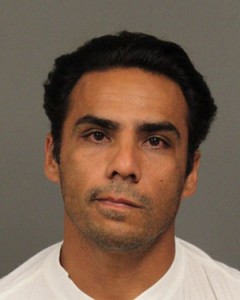 In March of this year, a San Luis Obispo jury found Higueros guilty of human trafficking of a minor by using force or fear, and guilty of twenty-four (24) additional crimes that include forcible rape, sodomy, and oral copulation against the same under age victim.

The sentence was pronounced by Superior Court Judge Jacquelyn Duffy, who presided over the trial. The case was investigated by the San Luis Obispo County Sheriff’s Office and was prosecuted by Deputy District Attorney Greg Devitt.

–A San Luis Obispo County Jury today found Oscar Higueros, Jr., 40, a former volunteer fire fighter in Cayucos, guilty of human trafficking of a minor by using force or fear and guilty of 24 additional crimes that include forcible rape, sodomy, and oral copulation against the same under age victim.

Deputy District Attorney Greg Devitt said, “I am thankful for all the hard work this jury did to bring this case to closure. These verdicts bring justice for the brave young woman who was the victim in this horrific case.” After the verdicts were delivered, District Attorney Dan Dow said, “These verdicts send a very clear message to anyone in, or passing through our county, that we will vigorously prosecute anyone who exploits children or any other human being in San Luis Obispo County.”

Higueros faces a maximum state prison term of 183 years and 8 months to life. Human trafficking of a minor by using force or fear requires a mandatory minimum sentence of 15 years-to-life in state prison. Additionally, the law requires many of the other sex crimes to be served consecutive to the other crimes. “The San Luis Obispo County Sheriff’s Office and our entire prosecution team worked together in an amazing way to uncover and investigate this horrific crime. I am very proud of every member of our team that contributed to bring Oscar Higueros to justice,” said Dow.

The trial was prosecuted by Deputy District Attorney Greg Devitt who also prosecuted the recent Richard Scott Brooks human trafficking trial. Higueros is held without bail and will be sentenced in Department 4 of the San Luis Obispo County Superior Court at 1:30 p.m., May 9, 2015.

The San Luis Obispo County Sheriff’s Office received a report of child abuse involving a minor under the age of 18. Deputies and detectives initiated an investigation into the incident which had occurred the month prior.

A suspect was identified as 38-year-old Oscar Higueros, Jr., of Cayucos. Higueros is a paid volunteer firefighter, a captain, with the Cayucos Fire Department. Last Thursday, a search warrant was served at his residence on Pacific Ave. in Cayucos where the alleged incident took place.

Higueros was arrested and booked into County Jail on three counts of rape by force or fear and sodomy involving a minor. Because the investigation is active and on-going, no further details are being released at this time, according to sheriff’s spokesman Tony Cippola.

Higueros is being held in jail in lieu of a $1 million bond.