– Players on the Central Coast Swingers, a newly-formed independent summer baseball team based out of northern San Luis Obispo County, are kicking off their first series of home games this weekend. The community is invited to bring the entire family out to Barnhart Field on the campus of Paso Robles High School and lend support to the hometown team. The first game of the series against the visiting California Wahoos is set for Friday, June 19 at 6 p.m. On Saturday, June 20, games will take place at 10 a.m. and 1 p.m.

“It’s going to be a weekend of high-level baseball and we are hoping for a good turnout from the local crowd,” said Andy Garretson, co-general manager of the Central Coast Swingers along with Alex Kotheimer. 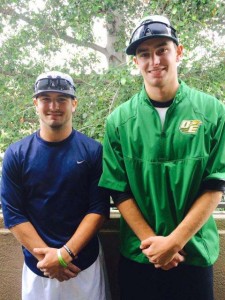 Garretson and Kotheimer, both graduates of Templeton High School where they were stand-out athletes in baseball, basketball, and football, came up with the idea of starting a wood bat independent collegiate summer baseball team earlier this year when it became apparent that the North County Indians would be disbanding. They had both played for the Indians last summer and, while roommates in college, decided they would try to gather a group of players together to form a team for the 2015 season.

With the help of Pete Kothemier, Alex’s dad and THS assistant baseball coach, and numerous fundraising efforts and team sponsorships, the idea became a reality. Derek Stroud, PRHS baseball coach, was instrumental in securing the field for the team.

“We rounded up a number of guys that were interested in playing, Pete put together a schedule and got things moving for us, and Derek has been very generous and gracious,” said Garretson. “They have made it easier for us to make this team a reality.”

That reality was apparent this past weekend when the Swingers traveled north to take part in the the inaugural Monterey Peninsula Tournament and brought home the championship. After a 1-3 loss to the Monterey Waves and a 1-1 tie with NorCal on Saturday, the team defeated the Coastal Growers Bulls (4-2), NorCal (8-3) and the Waves (4-1) on Sunday to claim first place.

On Tuesday, the Swingers traveled to Taft to face the Bakersfield Braves in a doubleheader. Short six players, they were unable to defeat the Braves and lost the games, 9-6 and 6-3.

Find a schedule and follow the Central Coast Swingers on Facebook at www.facebook.com/centralcoastswingers. To contribute funds or learn more about sponsorship opportunities, email andygarretson33@gmail.