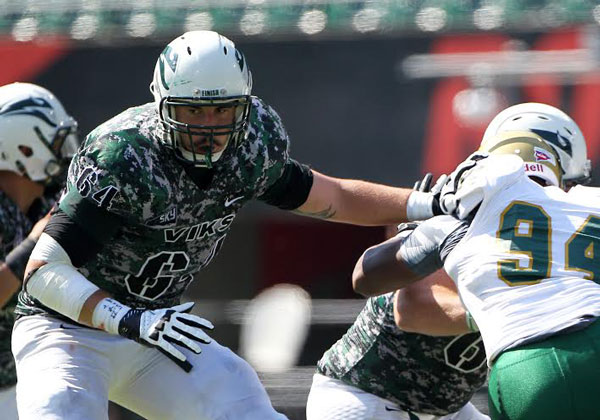 Just like any recent college graduate would have done, Mitchell Van Dyk has circled the date of his next job interview on his calendar.

The 2009 graduate of Paso Robles High School will compete in front of professional scouts in the College All-Star Bowl next month on the campus of Furman University in Greenville, S.C.

Van Dyk was a three-year starter at Portland State University and named first-team All-Big Sky as an offensive tackle in 2013. This past season, PSU boasted the third-most productive offense at the Football Championship Subdivision level. He anchored an offensive line that helped set school records in total yards (6,486), rushing yards (3,330), rushing average (277.7 per game), total offense (540.5 per game), and rushing touchdowns (36). Now his next test is to block the top defensive players from the ACC, Big Ten and SEC.

“I love challenges, and it’ll be a challenge to compete against the best,” he said. “I’ve played against Pac-12 teams, but it’s going to be awesome to play against the best defensive ends, defensive tackles and linebackers. I’m looking forward to the opportunity to show NFL scouts what I can do against elite talent.”

Over 100 scouts, including at least one from every NFL team and several from the CFL, have registered to attend the three practices prior to the Feb. 14 all-star game (3 p.m. PST, CBS Sports Network). At 6-foot-9 and 290 pounds, Van Dyk carries the prototypical frame that professional teams dream about having on their offensive line. However, he believes his NFL build won’t be the only thing teams will notice about his game.

“My size will show scouts what I’m able to do physically, but my preparation and mental approach to the game shows what I can do mentally,” he said. “I have a strong knowledge of offenses and defenses. I can read defenses and know what’s going on before the play actually happens.”

While in South Carolina for the game, Van Dyk, alongside 104 other players, will attend several off-the-field events intended to teach prospects about life in and after professional football.

The game’s staff will host a “Next Step” forum created to transition players from college to the pros. Led by former NFL standouts Brian Dawkins, Joe Jacoby and Nick Eason, questions about the draft combine, training camp or even personal finances will be answered in earnest.

On another night, leadership speaker Dr. Steven W. Edwards will teach the players about the life skills required to have a successful professional career. There will also be a mentorship program available to the players. The prospects will be given access to former pros and local businesses to create future networking opportunities.

“Our passion is to help these players not just get to the NFL but to help them prepare for life outside of football,” said College All-Star Bowl director of operations Michael Foster. “We see athletes struggle financially, struggle to find jobs and struggle to find something to do after football. We have a great group of people putting this thing together. We give the players guys they can look up to. Someone they can give a call to after this game if they ever need any advice.”

Playing in the game marks the end of one chapter for Van Dyk and the start of another one. He’ll turn in his criminal justice and criminology text books for playbooks filled with just as much technical information. He’ll trade waking up for class at 7 a.m. for waking up for his morning lift and film study session at 5 a.m. at an NFL training facility. Regardless of where he lands, he’s thankful for his time at PSU and for the opportunity to play in the College All-Star Bowl.

“I’ve played college football for five years, and it was fun making my mark and leaving my legacy,” he said. “It’s an accomplishment enough to play in an all-star game. My grandparents, brothers, relatives and friends are all really proud of me. It’s nice how they’ve always been by my side to see me achieve on the field.”