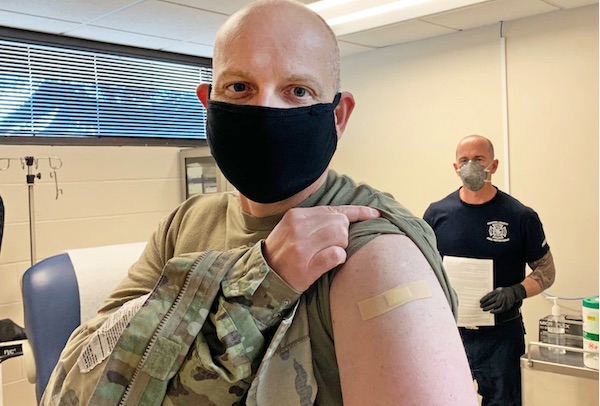 –U.S. Army Garrison Fort Hunter Liggett in Monterey County administered its first round of the Moderna COVID-19 vaccines to the workforce and tenants at the post medical clinic, March 23-25. The first wave of soldiers and civilian employees arriving from Parks Reserve Forces Training Area (PRFTA), FHL’s sub-installation in the Bay Area, also rolled up their sleeves for the jab.

“People are our number one priority, and their health and safety are critical to our mission,” said Col. Charles Bell, Fort Hunter Liggett’s garrison commander. Because it has been difficult for many people to obtain the vaccine from various civilian sources, and because soldiers and many civilian employees are not in the currently eligible categories, Bell said he felt it was important to speed up the vaccine availability.

Fort Hunter Liggett went through a lengthy process to bring the vaccines to this remote installation because it did not rate designation as one of the Army hubs for vaccine distribution. Part of that process was to get a freezer capable of storing the Moderna vaccine, which needs temperatures between minus 13 and plus 5 degrees Fahrenheit.

“We are the first installation that has gone through the request process through the Army Reserve over to DoD, so we cracked the code on the process to receive the vaccine,” said Bell. “It’s like Christmas here. I’m glad we have several hundred first and second doses to provide to our tenants, employees, PRFTA, and 63rd Readiness Division Headquarters.”

Bell and his command team were the first in line for the vaccine, administered by FHL paramedics and overseen by medical personnel at the Presidio of Monterey.

“I got vaccinated because I wanted to do my part to protect the team,” said Bell. “Protecting the team means you need to protect yourself, your family, and the community.” More clinics are planned to make sure everyone who wants the vaccine gets one.

“It was kind of a bumpy road,” said Blatz, “but it was because we were paving the road for everybody else. There were a lot of moving parts, a lot of people involved. The biggest hurdle was finding who to get our information to in order to trigger our allocation. We worked through Installation Management Command, USARC, Army Materiel Command, Headquarters Department of the Army, trying to figure which path to take.”

The U.S. Army Reserve Command has since released an Operational Order with guidance to allow more installations to administer their own vaccines.

So now FHL is a miniature hub, supporting PRFTA, the 63rd RD personnel, and Moffett Field. “Hopefully in the future, we’d like to travel and take the vaccine to these locations versus having entire populations of those installations coming down here,” said Blatz.

On day three, residents and family members were given the opportunity to receive the vaccine as well. Another vaccine clinic is scheduled a month from now, to give vaccinated personnel their second doses, and to make more first doses available.

Soldiers and Civilian employees of the 63rd Readiness Division out of Mountain View, joined PRFTA on day two. Maj. Gen. Alberto Rosende, commanding general of the 63rd RD, rolled up his sleeve and emphasized the importance of getting soldiers and Department of the Army civilians and their families vaccinated.

Firefighter/paramedics at FHL volunteered to administer the COVID-19 vaccine. That required an application to the Local Emergency Medical Services Authority in Monterey County and additional training.

“Being a paramedic, administering medications is something we normally do,” said Andy Jones, FHL firefighter/paramedic. He received his vaccination two months ago, and advises people who are hesitant to do their own research. “Look at the risk of getting the vaccine versus not getting it,” he said. “See what works best for you. I did a lot of research and I was comfortable getting it.”