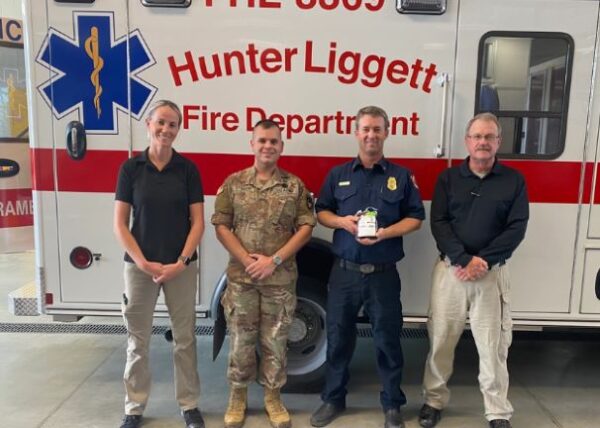 No EMS system in California otherwise currently provides this capability

– U.S Army Garrison Fort Hunter Liggett’s remoteness and the robust efforts of Fire Captain Devon Haggie, recently allowed the installation to be the first in the Army and Department of Defense to receive the life-saving capability to transfuse whole blood by its Emergency Medical Service (EMS). In addition, no EMS system in California otherwise currently provides this capability, making the FHL program the first in the state. Prehospital whole blood programs are the aspiration of many EMS systems nationwide.

“Having this system and the ability to provide whole blood to injured Soldiers and civilians on Fort Hunter Liggett is a life-changer,” said Haggie, EMS Coordinator. He witnessed the significance of this program during a visit with San Antonio Fire Department EMS in Texas last year.

“They told me stories of people being completely unresponsive and most likely going to die,” said Haggie. “And with one unit of whole blood administered, the patients are actually sitting up and talking while being wheeled into the trauma center. That alone is extremely eye-opening to me, and being so remote was one of the reasons why I pursued this capability for the installation.”

“There are several other installations that have this requirement but don’t have motivated staff like Mr. Haggie, or the infrastructure to support this program,” said Dr. (Maj.) Nicholas Studer, Physician-Scientist at the U.S. Army Institute of Surgical Research (USAISR) at Joint Base San Antonio-Fort Sam Houston, Texas, and the Medical Director for the Army EMS Program. “Mr. Haggie almost single-handedly enabled this capability for Fort Hunter Liggett.”

Crucial factors that played into FHL’s selection as the first Army prehospital Whole Blood site were the Garrison Commander’s emphasis on prehospital medicine, Soldiers’ survivability in training areas, and the installation’s austere environment. The Army EMS Program, USAISR, and Armed Services Blood Program worked together to overcome the logistics, equipment, and training barriers to bring whole blood to FHL. FHL’s whole blood program utilizes components that were developed for battlefield use by the USAISR, as well as proven technologies that stem from the Army’s civil-military integration programs in the San Antonio area in particular.

The Army has increasingly recognized the requirements for rapid pre-hospital blood infusions for soldiers injured on the battlefield. In 2019, Studer reached out the last producer of “trauma tubing” and modified the “TraumaFlow” tubing product to meet the Army’s requirements. Partnered with the San Antonio Fire Department, that agency made the initial purchases of a new tubing product that can support both military and civilian patients.

“You can expect that blood tubing is usually twice as fast at infusing fluid as regular IV tubing, and TraumaFlow is three times as fast as regular blood tubing,” Studer said. He added that TraumaFlow is more compact and significantly less costly compared to several other products available to rapidly transfuse blood on the battlefield or on city streets in America.

FHL also received a QinFlow Warrior blood/fluid warmer and a Peli Biothermal CREDO blood storage cooler. Both were developed for military purposes and are well-proven with the whole blood program in the San Antonio metropolitan area, under the Southwest Texas Regional Advisory Council. Studer provided the initial training on these components, including the TraumaFlow tubing, to the FHLEMS staff on June 22, 2022.

Accompanying Studer on his FHL visit were Dean Ross and Bonnie Taylor with the Army’s Office of the Surgeon General (OTSG), to help answer questions and provide guidance. Ross is the Director of the Army EMS Program and is charged with standardizing EMS care Army-wide.

“My goal is to develop a sustainable strategy for 117 EMS program in the Army,” said Ross. Austere environments, such as FHL, have a more urgent requirement than those stationed in urban areas. “Fort Hunter Liggett is the beta-site and our first opportunity to field the program that could have very substantive benefits to those that are injured,” said Ross. He adds that “Blood delivery is not new, but it is to the pre-hospital environment so we’re adapting skills that both the Army and the civilian sector already has to the installation environment.”

“The Army’s standard of care for trauma patients is to provide whole blood in the field,” said Taylor, Paramedic and OTSG EMS Systems Program Evaluator. “Additionally, the military and installations like Fort Hunter Liggett, are in a unique situation to easily access blood banks, while most of the civilian pre-hospital care providers do not have that ability. There aren’t any State protocols for use of blood.”
FHL is once again, leading the way for the Army’s efforts to provide a safe and sustainable environment for troops, and those that work and live at the installation. In addition to this new capability, FHL is also recognized by the Army and the Army Reserve as leading the way in energy resiliency and sustainability efforts.

“Working and living in a remote and isolated installation is a challenge,” said U.S. Army Garrison Fort Hunter Liggett Commander Col. Lisa Lamb. “And we are so grateful and honored to receive the Army’s continued support to provide enhanced services and improve the quality of life at Fort Hunter Liggett.”