On March 27, 2015, Fort Hunter Liggett held a ceremony to mark the transfer of 2.5 acres of land under and around the historic Tidball Store from the U.S. Army to the County of Monterey. 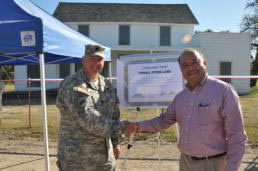 In 1940, the U.S. Army purchased a 154,000-acre parcel from the Hearst Corporation and established the Hunter Liggett Military Reservation. The reservation was a vital training ground for troops deploying to support World War II.

The land purchase inadvertently cut-off access to some land owners but the U.S. Army has granted easement to them since the 1940s. The land transfer from the U.S. Army to the County of Monterey will solve the easement issue for access to the Tidball Store.