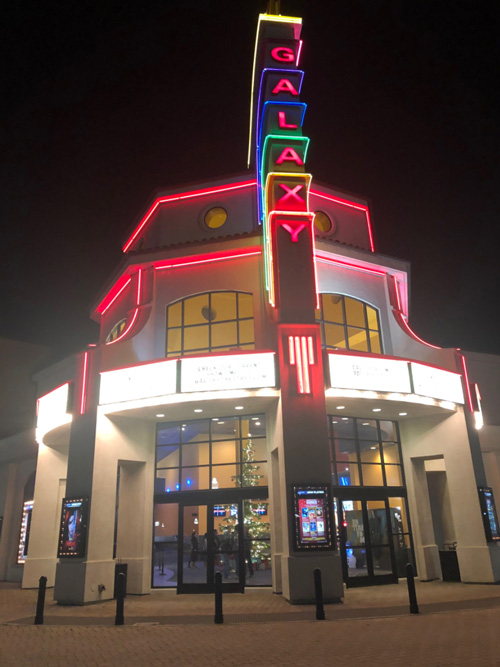 –At the Atascadero City Council meeting held on Tuesday, the city council adopted a resolution in support of Galaxy Theatre, all Colony Square commercial tenants, and the Colony Square property owner, during COVID-19. The City of Atascadero recognizes that Galaxy Theatre, along with all of the retail tenants of Colony Square, are a vital component of the downtown community, the city says. Keeping the theater and the Colony Square businesses alive and operational and with continuity of ownership, is critical to the community’s recovery from the economic effects that the COVID-19 restrictions have had, the city says.

According to property records, lenders filed a notice of default against theatre owner Cinema Square LLC for $7.8 million on Oct. 27, starting the foreclosure process.

Since the COVID-19 related March 2020 statewide shutdown of many businesses, especially restaurants, theaters, and other venues that include public gathering, Galaxy Theatre has been primarily closed to the public, other than a few private events. The closure has resulted in significant economic hardships to both Galaxy Theatre and the surrounding businesses, the impact of which has been felt by the business leaseholders as well as the owners of the Colony Square properties. Cinema Square LLC property owners have been working closely with the Colony Square tenants, including Galaxy Theatre and Que Pasa Mexican Restaurant, throughout the pandemic-related closures.

Galaxy Theatre is one of the most significant tenants in Colony Square and provides the largest portion of rental revenue for that portion of Colony Square, owned by Jeff Nelson. During the pandemic-related closure and economic hardships, the theater and neighboring businesses have not been able to make rent payments, which in turn has severely restricted Mr. Nelson’s ability to keep up with mortgage payments on his portion of the property.

The lender on the Cinema Square LLC property, a lending group from New York including Wells Fargo, CW Capital, SEER Capital, Jeffries LoanCore, and Wilmington Trust, has initiated foreclosure on the Colony Square property, which includes Galaxy Theatre, the city reports. Under New York law, they legally cannot foreclose on any New York property and according to some reports, the foreclosure action against the Colony Square property in Atascadero may currently be the only COVID-19 related commercial foreclosure in San Luis Obispo County.

When open and at typical capacity, Galaxy Theatre is a major contributor to the overall success of Atascadero’s downtown. The theater’s survival is a vital component of the city’s well-being and without it, Atascadero will not only lose a significant entertainment venue, but many other existing as well as potential new downtown businesses will suffer as well, with reduced lodging, dining, shopping and foot traffic, the city says.

Elected officials have weighed in on the issue to express their concerns, including U.S. Congressman Salud Carbajal, who said, “The COVID-19 pandemic has been devastating to many of the small businesses that form the character of our community. We must do everything in our power to support these vital businesses and keep them alive, so they will still be around to prosper and continue to contribute to our local economy when we come out on the other side of the pandemic.”

California State Assembly Member Jordan Cunningham said, “Before foreclosing a cherished and economically-important local business, the bank should give Galaxy Theatre the opportunity to apply for and receive a grant as part of California’s days-old stimulus program.” Assembly Member Cunningham went on to say, “Over the past year, too many local businesses have been forced to permanently shut their doors – resulting in unprecedented job loss on the Central Coast. With new programs available to small businesses, I join my colleagues by imploring the bank to halt foreclosures and give business who have been able to survive this long a chance at a California small business grant.”

“I know how important Galaxy Theatre and the Colony Square businesses have been to the economic growth and vitality of Atascadero’s downtown community”, said 5th District Supervisor Debbie Arnold. She went on to say, “At a time when many businesses are struggling through no fault of their own, we need all economic partners working together, including the banking community, to ensure an economic recovery in San Luis Obispo County.”

According to Mayor Heather Moreno, “Until COVID-19 struck, the businesses of Colony Square, including its anchor, Galaxy Theatre, were a major contributor to the progress and success of Atascadero’s downtown. Our community needs an open and thriving Colony Square with its vital entertainment venue, Galaxy Theatre. Continuity of ownership and allowing these businesses the opportunity to make a come-back are critical to the successful recovery of our downtown, while foreclosing on these properties could have a long-term, devastating impact”.

The Atascadero City Council adopted the Resolution that declares the significance of Galaxy Theatre to Atascadero and that its temporary closure due to COVID-19 is against the will of the property owner and operator of Galaxy Theatre. The Resolution states that the potential foreclosure and loss of the theater in the community has significant negative impacts on other businesses and on city revenues and services as well.