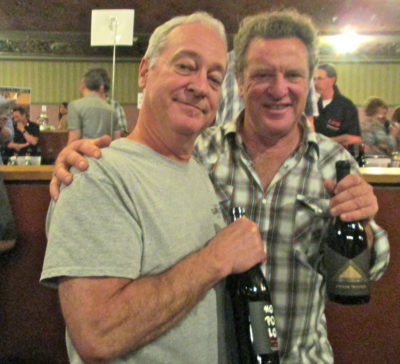 –The Garagiste Wine Festival marks its 21st festival, and 8th anniversary, at its home base in Paso Robles, Nov. 9 through the 11, with three days of events, including a Grand Tasting that showcases over 60 micro production winemakers, 20-percent of whom are pouring at the festival for the first time.

Tickets are on sale now at http://californiagaragistes.com/buy-tickets/.

In addition to its signature range of over 200 wines, over 20 different grape varieties and new and iconoclastic blends, this year’s festival pays tribute to the increasing influence of Spanish grape varieties in California. This includes a Rare and Reserve tasting matched with Paella and a seminar dedicated to Spanish varieties – from albarino to graciano – and how today’s artisan winemakers, including Enrique Torres of Diablo Paso, Louisa Sawyer Lindquist of Verdad and Jeremy Leffert of Croma Vera Wines, are crafting trail-blazing wines from them.

“We are turning ‘21!’ This doesn’t necessarily mean crossing into adulthood (we’ll never grow up!); but it does mean we’ve hit on something that both dedicated wine drinkers and the growing micro-winery community find valuable,” said Garagiste Festival Co-founder Doug Minnick. “It feels great to have helped so many wineries find their audience while helping new audiences find exciting new winemakers. We’re like a matchmaking service where everyone ends up getting married!”

Dubbed “tasting nirvana” ‘strange and wondrous,’ and “one not to miss” by the LA Times, the Garagiste Festival is renowned for its renegade spirit, passionate winemakers, handcrafted wines and rules-breaking, ‘no snobs allowed’ ethos. Launched in Paso Robles in 2011, the festival features the wines of commercial garagiste* winemakers who make under 1500 cases at festivals across California, including Solvang, Sonoma, Los Angeles and Paso Robles. Over 350 different wineries have poured over 3,000 wines for over 10,000 wine lovers at Garagiste Festivals since inception.

“The festival is a Paso wine-tasting tradition,” said McLennan. “Big, bold and badass. So if you’ve never been to our Paso festival, you need to come join the fun.”

“And it is all for a good cause – the festivals have raised over $125,000 for The Garagiste Scholarship at Cal Poly. So, as you broaden your exposure to some of the most innovative winemaking in California, you are also supporting winemaking’s future generations,” said Minnick.

The Garagiste Festival was the first event to define, and shine a spotlight on, the American “garagiste*” wine movement and has introduced outstanding California artisan winemakers to thousands of passionate wine consumers, members of the trade and media, helping to ignite the awareness, business and reputations of hundreds of artisan winemakers.

Among the over 60 winemakers already scheduled to pour are:

*Garagistes (garage-east) is a term originally used in the Bordeaux region of France to denigrate renegade small-lot wine makers, sometimes working in their “garages” (anything considered not a chateau), who refused to follow the “rules,” and is now a full-fledged movement responsible for making some of the best wine in the world. The Garagiste Festivals were the first to shine a light on the American garagiste winemaker in 2011.