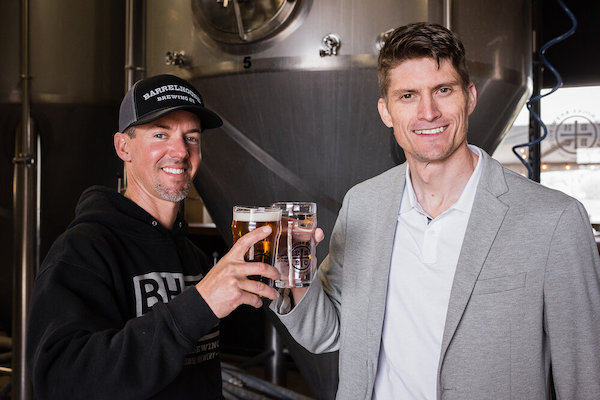 Under a working title of “beer from air” (trademark pending), atmospheric water has only been attempted once before in a trial run, but to date has not been used to sustainably create any beverage brand. The reason is that no other atmospheric water generation systems scale water production capacity – from 1,000 to 10 million gallons per day. Today’s partnership makes history and opens a new frontier of beverage industry sustainment. Using Genesis’ patented technology, which uses a fluid-based process to extract pure water vapor from the air, BarrelHouse is positioning to supply itself with affordable, reliable, self-sourced freshwater. As water rates in California have increased over 70-percent in the last decade and are forecasted to rise an additional 50-percent in the next five years, businesses across the state are seeking smart alternatives to balancing high costs with sourcing limitations.

“We are currently in the process of designing a new brewing facility from the ground up where our goal is to implement the typical green building practices that you are used to seeing such as solar and water/grain re-use that are becoming the norm in our industry,” says Jason Carvalho, president and CEO of Barrelhouse Brewing Co. “The difference is that we also plan to use a new technology that nobody else is using. Just because our competitors have been doing things a certain way for centuries, does not mean that we need to follow suit. Water has become increasingly important as our company grows. Groundwater is becoming more scarce and increasingly difficult to use due to increasing minerality (hardness) in water, which means increased filtration and water losses. The technology that we are implementing from Genesis will reduce our overall water losses due to the superior purity of atmospheric water. We plan to get most, if not all our water and CO2 from the atmosphere. Our ultimate goal is to craft great beer while reducing our impact on our most precious resource, water.”

Genesis’ system produces no byproducts such as the brines associated with reverse osmosis or desalination (which is currently used to provide large volumes of water across California), has no impact on the environment, and uses a process that creates twice distilled water from filtered air – providing the cleanest water possible. Further, the technology is scalable, allowing BarrelHouse to expand its water demand capabilities with its continued growth – a high probability since the craft beer industry is projected to grow over 19-percent to $502 Billion dollars by 2025.

Initial agreements call for between 1,000 and 2,000 gallons per day production with future plans to expand. Dr. David Stuckenberg, COO & board vice chairman of Genesis Systems noted, “The partnership and collaboration between BarrelHouse and Genesis represents the leading edge of innovation and smart resource management in the beverage industry. As an exemplar of sustainable water production, I would not be surprised if a large segment of the global beverage industry turns to the sky for reliable and sustainable water to meet its needs. The world is changing rapidly, so we need to boldly lead and adapt to the changes.”

Stuckenberg Co-founded Genesis Systems in 2017 after he flew a humanitarian mission in the Middle East where he witnessed a nation’s last natural water supply run out. Genesis Systems is “committed to the mission of solving global water scarcity in a sustainable way.”