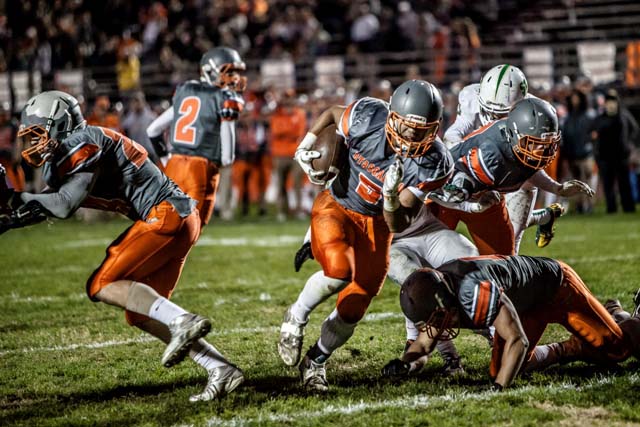 Close to the 3:30 mark on the clock in the second quarter of Atascadero’s CIF football game against the St. Joseph Knights, Marc Martin runs the ball in for a touchdown for the Hounds. Photo by Rick Evans

–In the first round of the CIF Southern Section Northern Division football playoffs last Friday night, Atascadero hosted St. Joseph but the Greyhounds were unable to secure a win as the Knights earned a 26-16 victory.

The first quarter ended with the Knights holding a 6-3 lead. After a St. Joseph fumble in the second quarter, Atascadero took possession of the ball and, a few plays later, the Hounds’ Marc Martin made his way into the end zone for a touchdown. The extra point kick went wide, and the Hounds took a 9-6 lead with 3:33 remaining in the second quarter. 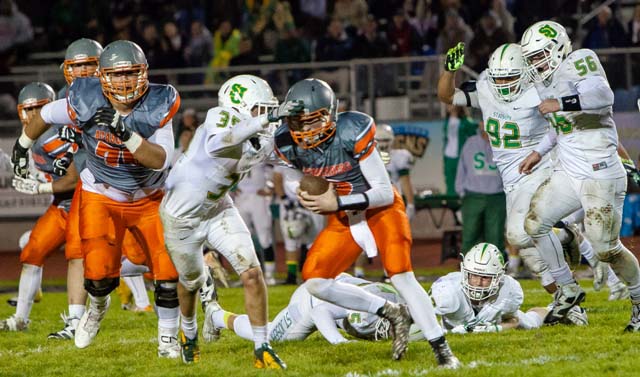 Atascadero quarterback Carson Rinkenberger scrambles for safety after being flushed out of the pocket during the Hounds’ CIF game against the Knights. Photo by Rick Evans

The Knights quickly answered back with a touchdown and, despite a failed 2-point conversion, held a 12-9 lead over the Hounds going into half-time.

The third quarter had St. Joseph missing an attempted field goal. With 6:40 left in the quarter, the Hounds took a16-12 lead thanks to an amazing long run into the end zone courtesy of RJ Reusche and a successful PAT. 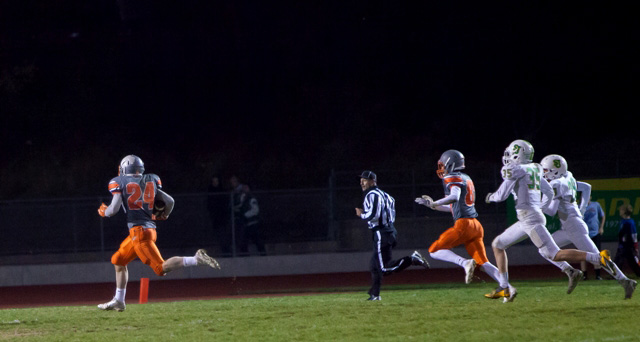 Atascadero’s RJ Reusche makes a huge run into the end zone to score for the Greyhounds in the third quarter against the visiting St. Joseph Knights. Photo by Rick Evans

Although that would be the Hounds’ final scoring opportunity, the Knights would find the end zone again in the third quarter and one more time in the fourth. With both PATs good, the St. Joseph players secured a 26-16 victory over Atascadero.

With the loss, the Hounds ended their season with an 8-3 record and will not advance further into CIF. The Knights, 9-2 overall, will host the Camarillo Scorpions (11-0) on Friday, Nov. 20 in the CIF quarterfinals.