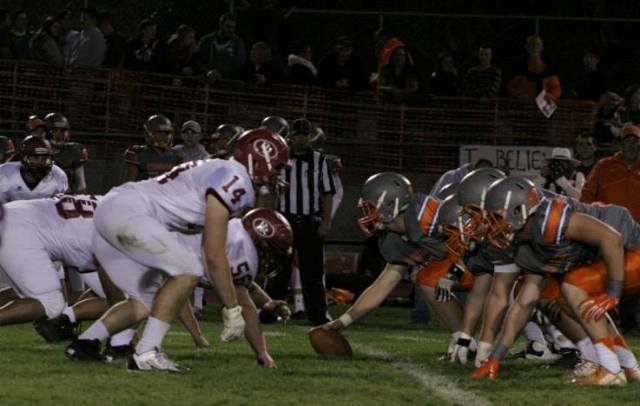 The Paso Robles Bearcats and the Atascadero Greyhounds put it all on the line during their Friday night cross-town rival game. Photo courtesy of Jennifer Railsback

Atascadero High School’s Memorial Stadium was packed with a standing room only crowd on Friday night as the Greyhounds hosted the Paso Robles High School Bearcats in the PAC-5 regular season football finale for both teams. What a game it was, as Atascadero dominated the line of scrimmage on offense and defense throughout the game and claimed a 28-18 victory over Paso Robles. With the win, the Greyhounds share the PAC-5 championship with the Bearcats and the Arroyo Grande Eagles. 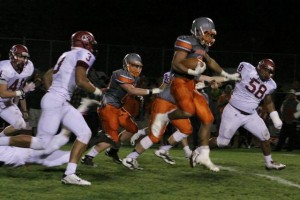 Atascadero High’s Marc Martin was a force to be reckoned with, running for 186 yards on 31 carries and 3 TD’s in the Greyhounds’ victory over the Paso Robles High Bearcats. Photo courtesy of Jennifer Railsback

In last years’ meeting, the Greyhounds defeated the Bearcats 22-21 in double overtime.The rivalry between the two teams was even more intense than usual this year with so much at stake this season: going into the battle, the Bearcats were ranked No. 1 in the CIF Southern Section Northern Division with a record of 9-0 and were on top of the PAC-5 with a 3-0 record, while the Greyhounds were ranked No. 8 with a record of 7-2 and 2-1 in PAC-5.

The Bearcats played Friday’s game without their star running back, Christian Erickson, who was injured during the previous week’s game against Righetti. Erickson had been averaging 153 yards rushing per game.

Neither team was able to do much on their first possessions, but that would change quickly on the Bearcats’ next opportunity. The Greyhounds’ Josh McEwen tackled Paso’s Bailey Gaither on a fly sweep, causing him to fumble. Atascadero recovered at the 20-yard line and scored quickly, with QB Tommy Carr going into the end zone on a 1-yard touchdown run. After the PAT, the Greyhounds were up 7-0 with 5:45 left in the first quarter. 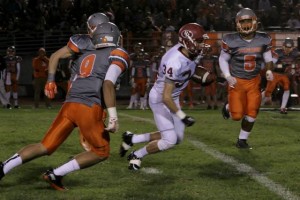 Paso High’s Bailey Gaither scored both touchdowns of the night for the Bearcats, including a a 94-yard kickoff return. Photo courtesy of Jennifer Railsback

The Bearcats spent most of the first quarter deep in their own territory and the Greyhounds defense kept them bottled up. The Greyhounds’ Cooper Kuhnle ran for 11 yards on a fly sweep, putting Atascadero at the Bearcats’ 34-yard line to start the second quarter. The Atascadero offensive line dominated the line of scrimmage as running back Marc Martin took four consecutive carries and scored on a 1-yard TD run and the Greyhounds had the Bearcats in a hole 14-0 with 10:30 left in the second quarter.

The Bearcat offensive got in gear on their next possession. A pass from QB Justin Davis to Josh Oliver would have given the Bearcats a first down at the Greyhounds 22-yard line, but was nullified by a “chop block” penalty against Paso. Three more penalties on the Bearcats would force them to settle on a 48-yard field goal by Bryce Pasky. Atascadero led 14-3 with 6:09 left in the half. 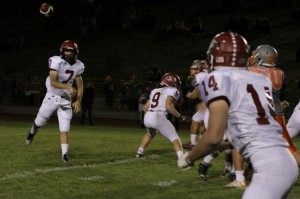 Paso High quarterback Justin Davis completed 16 of 31 passes for 233 yards and one TD for the Bearcats on Friday. Photo courtesy of Jennifer Railsback

The Greyhounds were unable to get anything going on their next possession against a stubborn Bearcat defense and were forced to punt, giving Paso a first down at their own 26-yard line. Davis threw a perfect pass to Gaither who had beaten the Greyhound defender on a post pattern. Gaither caught the ball at the Atascadero 32-yard line and cruised into the end zone for Paso’s first touchdown of the night. The PAT was good and the Bearcats were back in the game, trailing 14-10 with 3:33 left in the half.

The Greyhounds drove down the field on impressive runs by Martin and two clutch catches by Kuhnle. Atascadero had the ball at the Bearcats’ 8-yard line with 15 seconds left in the second quarter, but QB Carr overthrew his receiver in the end zone to end the first half with a 14-10 lead over Paso. 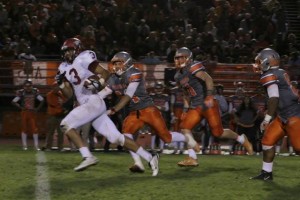 Bearcat Josh Oliver moves the ball down the field past a slew of Greyhounds. Photo courtesy of Jennifer Railsback

Atascadero received the opening kick-off and had the ball at their own 30-yard line to start the third quarter. Carr ran left on a read option, raced 51 yards down the sideline, and was caught from behind by Gaither at the 19-yard line. Martin took over from there and had runs of 13 and 6 yards as he scored his second TD for the Greyhounds. The PAT was good and the Greyhounds regained their momentum, leading the Bearcats 21-10.

Later in the third quarter, the Greyhounds began a drive at their own 45-yard line and methodically moved down the field using a mix of run and pass plays. Greyhound running backs R.J. Reusche and Martin had impressive runs and a pass to tight end Karson Block put the Greyhounds at the 2-yard line. Martin scored his third touchdown of the game, running untouched into the end zone. After the PAT, Atascadero held a 28-10 lead over Paso with 1:56 left in the third quarter. 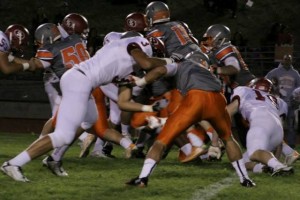 The Bearcats and Greyhounds battle it out for the PAC-5 title. Atascadero finished the night with a 28-18 victory to claim the league title, with Paso Robles taking second in league.  Photo courtesy of Jennifer Railsback.

Just as the game appeared to be out of reach, Gaither took the kick off at the 6-yard line, followed a wall of Bearcat blockers, and raced 94 yards for a Paso touchdown. After Atascadero was penalized on the PAT, the Bearcats elected to go for the 2-point conversion. Running back Mark Armstrong took the pitch from Davis, ran right, and made the conversion to bring the Bearcats within 10 points of the Greyhounds with 1:37 left in the third quarter.

The Bearcats were unable to stop Martin, who ran for 186 yards on 31 carries and 3 TD’s for Atascadero. Carr proved to be a very mobile quarterback, eluding several Bearcat defenders, completing 8 of 13 passes for 100 yards, and running 88 yards on 10 carries for the Greyhounds.

The Bearcats were led by Davis, who completed 16 of 31 passes for 233 yards and one TD for Paso Robles. Armstrong had 13 carries for 46 yards. Gaither had seven receptions for 140 yards and a TD, and a 94-yard kickoff return for Paso’s other TD of the night.

The fourth quarter had both teams unable to sustain any scoring drives as they traded possessions. With a 28-18 victory over Paso Robles, Atascadero (8-2 overall, 3-1 PAC-5) clinched the league’s No.1 seed in the CIF-Southern Section Northern Division playoffs. The Bearcats (9-1 overall, 3-1 PAC-5) enter playoffs as second seed and the Eagles as third due to a pre-season draw in the event of a tie for first place.

Both the Greyhounds and the Bearcats will host CIF playoff games on Friday, Nov. 14 — details to be announced soon.