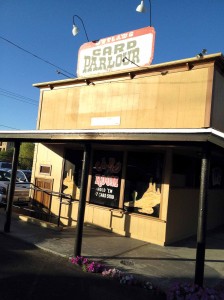 After a long day of work, or play, hardly anything feels better than a good meal and a refreshing beverage. It’s good to treat yourself occasionally; let someone else do the work while you relax and have some fun. If you’re looking for some fun and, more importantly, some good food and drink, then grab a friend and head on down to Overland Stage Western Steakhouse.

“I still remember the first meal he cooked for me,” sighed Dora Brown, owner of Overland Stage, talking about when she first met her husband Al. “And I said to myself ‘He might be a keeper’ because I don’t like to cook!”

Al Brown had an early career as a hardware sales representative, a position that required travel and lots of eating out. Inspired by the restaurants he frequented, Al taught himself how to cook, and together with Dora and another friend opened the original Outlaws Restaurant in Playa Del Rey, California in 1984. The Browns did a lot of traveling between San Francisco and Los Angeles, but had never made a stop on the Central Coast. When they finally did, they fell in love with the area and decided to open another restaurant. The location they chose had hosted two previous restaurants and an antique mall; after some renovations they opened the doors on July 20, 1991.

Originally called Outlaws Bar and Grill, Al and Dora decided to change the name of the restaurant to Overland Stage Western Steak House, as a tribute to the original Overland Stage in the same location.

“We have a real simple philosophy,” said Dora. “We want people to come in, relax, have some good food in a friendly, clean environment and leave satisfied.”

Food for every appetite

And leave satisfied you will! Overland dishes up generous servings of just about everything: Mexican food; seafood, including the customer-favorite clam chowder; pastas; salads; burgers; and of course, steaks.

The folks at Overland strive to bring real quality to their customers. They serve only USDA Choice meats and work hard to make sure what’s brought to the table is fresh.

They’re not fancy – the menu doesn’t boast exotic dishes you don’t know how to pronounce; the atmosphere is low-key – but the food is good and filling, and the staff (some of whom have been with the establishment since the beginning) is friendly. In the restaurant industry for 20+ years, the Browns say that running a successful business requires understanding every aspect, plus a love of people and a lot of hard work. The folks at Overland Stage Western Steakhouse are like a family, and they work hard to make sure you and your family enjoy the time you spend with them

Overland also has pool tables, an extensive juke box, and is a great venue to gather with friends to watch your favorite sports. Karaoke has recently been added to the entertainment lineup on Tuesday nights from 9 p.m. to midnight. Happy hour prices are offered from 2-6 p.m. Monday through Friday and during televised sports games.

The Overland Stage and Western Steak House is truly unlike any place you’ve ever been to. The quirky western-themed interior will have you immediately developing a sense of nostalgia for the place. Above everything, Overland is really a place to have a good time.

Also part of the Overland family is Outlaws Card Parlour. A licensed facility since 1996, Outlaws offers Vegas-style Blackjack Thursday through Monday; hosts No Limit Texas Hold’Em games and tournaments Thursday through Tuesday, and Omaha on Wednesday and Saturday nights. And coming soon – Outlaws will have 3-card Poker with the 6-card Bonus feature. Call (805) 466-7950 after 4:30 p.m. for a schedule of games and more details.